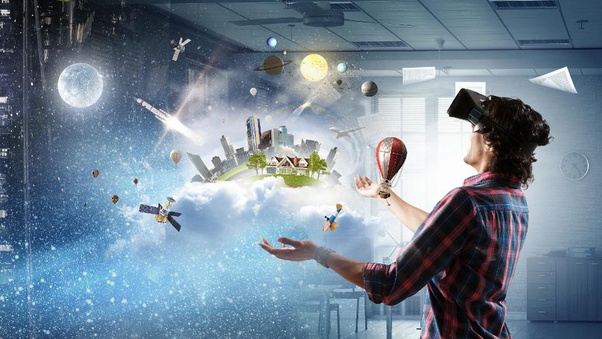 Users are completely immersed in a computer-generated reality when they experience virtual reality. Virtual reality is the most well-known of immersive technologies. While the world of gaming and entertainment were early adopters of virtual reality, VR applications are now used in many organizations and industries including the military, engineering and construction, healthcare, education, business and more.

When a user puts on a head-mounted display or a VR headset, they sense—and their brains believe—they are moving among virtual objects on a screen. Most commonly, the headset is connected to a PC or console that enables the virtual experience. In the case of Google Cardboard, Samsung Gear VR and Google Daydream, it’s a smartphone that creates the virtual experience, while the Oculus Go can do it all because it’s a standalone VR headset.

Virtual reality tools already help surgeons plan surgery, individuals experience a travel destination even before they take flight, children learn in a simulated (but very real) walk on the moon and soldiers train for combat scenarios, but the future will be full of even more VR applications as businesses of all kinds figure out ways the technology can enhance operations.

Do you remember the Pokémon GO craze? That’s the most well-known application of augmented reality—technology that overlays digital information on the real world. Rather than provide a fully immersive virtual experience, augmented reality enhances the real-world with images, text, and other virtual information via devices such as heads-up displays, smartphones, tablets, smart lenses, and AR glasses.

Augmented reality is useful for more than just entertainment. Retailer IKEA created an AR app that helps shoppers visualize what certain products will look like in their home before they purchase them. The app overlays virtual versions of the products onto the real-live image of customers’ living spaces. In addition to IKEA, companies in aviation, automotive, healthcare, travel and tourism, and more are developing augmented reality solutions. Augmented reality technology can enhance travelers’ experiences in many ways. Imagine being on a self-guided walking tour and wanting to know details about the architecture of a building you discover. With an augmented reality technology app, you could just point your phone at the building, and all the details are projected in your line of sight.

Thanks to tools such as ARKit by Apple and Google’s ARCore and because smartphones can support many AR experiences, more individuals outside of the tech industry are getting exposed to the AR experience.

Where does mixed reality fit in on the immersive technology spectrum? A mixed-reality environment goes a step beyond augmented reality because users can interact in real-time with virtual objects that are placed within the real world. These virtual items will respond and react to users as if they were actual objects.

As the youngest immersive technology, awareness of mixed reality isn’t incredibly high, but companies who have invested in mixed-reality projects already give us a glimpse into its potential. Ford is one company that saw the potential of mixed reality and now uses it to prototype future vehicles instead of making prototypes in a physical environment.

Put simply, the difference between virtual, augmented, and mixed reality is:

If you have any other questions regarding the technology do not hesitate to ask directly – tim@lookinar.com or leave the request on our website Lookinar Studio.