Is the corona virus panic going to lead to a global crisis similar to the credit crunch of 2007-2008? 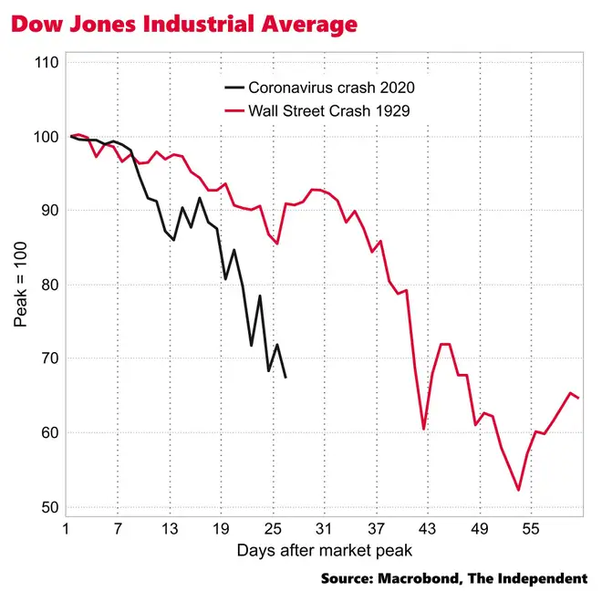 See how steep that dive is? We have a series of bubbles bursting all at once, unprecedented debt as well as unprecedented inequality, plus sudden shortage of both supply AND demand (factories closed, supply chains stopped, people are locked up at home, not spending). One person’s spending is another person’s income. If people spend much less then the effect is knock on, knock on, knock on… (in economics terms, the velocity of money has drastically declined).

Without growth, most tertiary forms of wealth, such as stocks and bonds, lose an enormous amount of their current value.

The majority of people don’t have much in savings, and the US medical care is expensive. On top of that we now read that even hospitals in the US are short of masks for their doctors and nurses, and also of other vital equipment (this is the case in the UK too). Oh, and not enough hospital beds, much less per capita than in Italy.

What were the authorities doing? They had two months to get prepared. Two months to see what was coming. This is gross incompetence. The Infuriating Story of How the Government Stalled Coronavirus Testing. Yet Johnson and Trump portraying themselves as wartime leaders. An effective leader would have acted decisively and quickly, as was done in Taiwan, South Korea, Singapore and Germany.

Most governments were/are slow to react, especially Japan, Italy, the UK and the USA. Most third world countries are completely unable to cope with the virus – one respirator per million I believe in some parts of Africa.

Deutsche Bank today predicted that [China will see its gross domestic product slump by 31.7% in the first quarter before rocketing to 34% in the following three-month period, the economists said. The US economy will grow by just 0.6% in the first quarter before slipping into a 12.9% contraction, they added]. 90% of China’s economy stopped for a month. The bank anticipated that declines would “substantially exceed anything previously recorded going back to at least World War II”. Banks worldwide, most already very shaky, will drown in defaults.

Debts go bad quickly, for example in the travel industry. One in eight companies in the US is a zombie company, only kept alive by very cheap interest rates. Fracking wells don’t last long and there is a massive numbers of junk bonds invested in them. Just 27 fracking companies have $26 billion of debt and financial obligations due in 2020. There will be many bankruptcies. With oil prices so low the oil and fracking industries, and those based on oil, will suffer.

All assets have been inflated since 2008. The Fed must expand the scale of its asset purchases. They are scared to death of deflation because the whole system would crash (when people don’t spend deflation follows quickly). The income of the US Govt is totally reliant on the stock markets. There is a very close co-relation between the two.

Deutsche Bank itself is very financially precarious: the bank had 49 trillion dollars in exposure to derivatives as of the end of 2019, putting it in the same league as the U.S. juggernauts JPMorgan Chase, Citigroup and Goldman Sachs, which logged in at $48 trillion, $47 trillion and $42 trillion, respectively. One in six U.S. companies is now a zombie, meaning their interest expenses exceed their earnings before interest and taxes.

Money, bailouts, bankruptcies and many deaths seem likely unfortunately. What would have been a bad crash anyway has been made much worse by this virus. In all, its a bit like throwing sand into the engine of a car. Only a total lockdown seems to slow this virus as it is so contagious, but that also shuts down the economies of the world.

There is now pretty much a complete shutdown of the world economy and this should result in a massive deflationary impulse. So the central banks will print like crazy (basically inflation to counter deflation). Expect MASSIVE money printing in the next few months, but that risks destroying the value of currencies. You cannot keep printing currency without a loss of purchasing power. Also, once foreigners see that loss of value they will start selling the dollar. And its not just the US: the ECB will also be printing. In the US two trillion dollars has been promised and almost no positive effect on the markets (printed via the magic money machine). TWO TRILLION DOLLARS AND NO EFFECT = they are pretty much out of ammunition. UPDATE: now SIX Trillion Dollars!

A crash in the USA – or in China, for their situation is also perilous – will affect the entire world economy, as everything is so interlinked.

Meanwhile, people are dying at a rate of one every three minutes in Italy. One Italian doctor said: ‘[Who lives and who dies is decided by age and by the [patient’s] health conditions. This is how it is in a war.]’ The UK and USA are about two weeks behind that, and no doubt Tokyo too (where I live). Deaths in Spain now surpass those in China!

The shock to the global economy from Covid-19 has been faster and more severe than the 2008 global financial crisis and even the Great Depression. And all in just three weeks. And we are not close to the worst of it yet.

Then there is pensions: the Economist estimated late last year that public pension funds were underfunded by $1.6 trillion. There are an awful lot of people – not just in the States – who will not receive anywhere near as much in retirement as they think they will, as the money was invested in shares and sometimes riskier investments like junk, and semi-junk, bonds.

April 2nd: In the US, now the hardest corona-hit country, the scale of the job losses in the past two weeks is on par with what we saw in two years during the 1929 onwards Great Recession. Now more than 6 million. 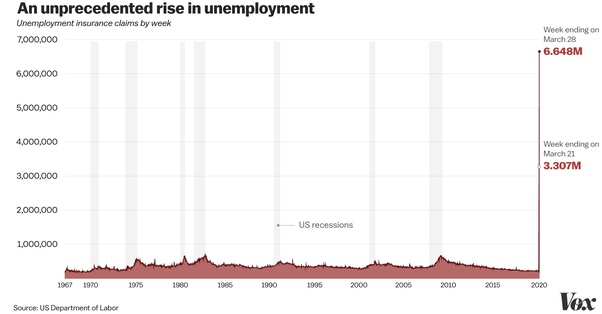 That chart will go a lot higher once Aprils figures come in.

[Unemployment in Britain and the US could surpass the levels reached during the 1930s Great Depression within months as the coronavirus crisis crushes the global economy], in the opinion a former Bank of England official and economics professor David Blanchflower.

For those who think that, once new virus cases start to go down, the economy will magically bounce back, this is from Charles Hugh Smiths ‘Of Two Minds’ blog:

[across the entire spectrum of global supply and demand, there is nothing but a vast sea of overcapacity / oversupply and a systemic decline in demand as far as the eye can see.

Here’s a partial list of commodities that are in overcapacity / oversupply:

2. Overpriced income streams (as income craters, so will the asset generating the income)

4. AirBnB and other vacation rental properties

All of the above is hugely deflationary, and the only answer that the authorities have to this is massive money printing.

And one more thing: think what the impact will be on developing and poor countries where people live one meal at a time (if that) and medical facilities are very poor. Oxfam has predicted that more than half a billion more people could be pushed into poverty unless urgent action is taken to bail out poor countries. Headlines today (22nd April) the UN warns of risk of widespread famines “of biblical proportions” caused by the coronavirus pandemic.

May 7th: The United Nations has warned that the global pandemic could cause “multiple famines”, as it appealed for a further $4.7bn in funding to help more than 50 vulnerable countries.

May 21st: Permanent job losses are likely to be a feature of the eventual US recovery, according to University of Chicago research. which estimates that 42% of recently unemployed workers will not return to their jobs amid the “profound” shock stemming from the corona virus lockdowns.

June 4th: A new study predicts a 2% decline in demand for fossil fuels every year could cause the future profits of oil, gas and coal companies to collapse from an estimated $39tn to just $14tn. It warns that a blow to fossil fuel companies could send shockwaves through the global economy because their market value makes up a quarter of the world’s equity markets and they owe trillions of dollars to the world’s banks.

June 4th: At least 6,390,085 people worldwide are known to have been infected, while at least 383,226 are confirmed to have died since the outbreak began.