the virtual reality display were players like, (from right) John Gerberding, 15, Sam Lutt, 15, and Shawn Carfield, 17, could be in video games playing volleyball, …

Are the conscientious Republicans revolting against Trump?

Are the conscientious Republicans revolting against Trump?

So far there at least 4 separate Republican for Biden groups that have formed. They are actively working to reach moderate and disaffected Republican voters by donating money, producing ads, conducting focus groups, and actively recruiting voters and activists.

The groups that I know of are listed below.

In addition, we are starting to see high level military officers warning us that Trump is abusing his Executive Power.

Donald Trump is the first president in my lifetime who does not try to unite the American people—does not even pretend to try. Instead he tries to divide us. We are witnessing the consequences of three years of this deliberate effort. We are witnessing the consequences of three years without mature leadership. We can unite without him, drawing on the strengths inherent in our civil society. This will not be easy, as the past few days have shown, but we owe it to our fellow citizens; to past generations that bled to defend our promise; and to our children…

We know that we are better than the abuse of executive authority that we witnessed in Lafayette Square. We must reject and hold accountable those in office who would make a mockery of our Constitution.

Retired Navy Admiral Mike Mullen, and former Joint Chiefs of Staff, made a statement as well.

[8] Retired Navy Adm. Mike Mullen, a former chairman of the Joint Chiefs of Staff, accused President Trump Tuesday of disrespecting the right to protest and potentially politicizing the military.

“It sickened me yesterday to see security personnel — including members of the National Guard — forcibly and violently clear a path through Lafayette Square to accommodate the president’s visit outside St. John’s Church”

In another statement by Navy Admiral Mike Mullin [9], he

spoke strongly against the notion of bringing in the military to quell violent protests in the U.S., warning that such a move could sink the public’s trust in the armed forces to levels not seen in more than 50 years.

Discussing the current political climate, Mullen recalled 1968 and the period following the assassinations of the Rev. Martin Luther King Jr. and Robert Kennedy, while the Vietnam War raged on and public opinion of the military was low.

“I see this reemerging, and from a war, quite frankly, where the United States military lost the respect and the trust of the American people,” Mullen recalled. “We’ve regained that. And in very short order, should we get into conflict in our own streets, there’s a very significant chance we could lose that trust that has taken us 50-plus years to restore.” 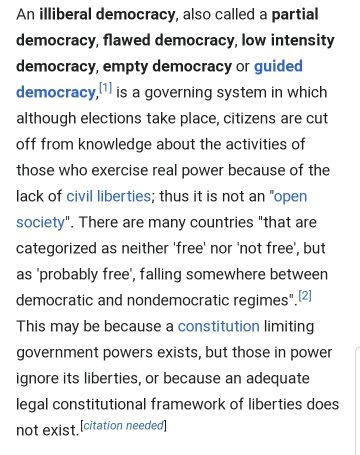 It wasn’t enough that peaceful protestors had just been deprived of their first-amendment rights – this photo-op sough to legitimise that abuse with a layer of religion.”

The retired general said military involvement should be reserved for “conflict in external wars.” 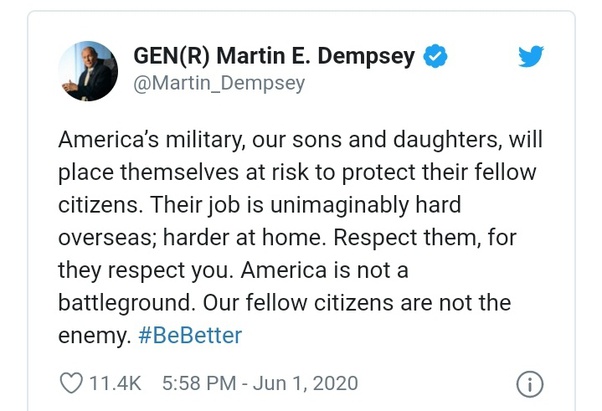 As I understand it, that was a peaceful protest that was disturbed by force, and that’s not right,” he said. “That should not happen in America. And so I was sad. I mean, we should all shed tears over that, that particular act.”

The resignation comes as the nation braced for its eighth night of protests sparked by the police killing of George Floyd. Here is part of the letter:

When I joined the Board in early 2014, after leaving government service as Under Secretary of Defense for Policy, I again swore an oath of office, one familiar to you, that includes the commitment to “support and defend the Constitution of the United States . . . and to bear true faith and allegiance to the same.”

You recited that same oath on July 23, 2019, when you were sworn in as Secretary of Defense. On Monday, June 1, 2020, I believe that you violated that oath. Law-abiding protesters just outside the White House were dispersed using tear gas and rubber bullets — not for the sake of safety, but to clear a path for a presidential photo op. You then accompanied President Trump in walking from the White House to St. John’s Episcopal Church for that photo.

President Trump’s actions Monday night violated his oath to “take care that the laws be faithfully executed,” as well as the First Amendment “right of the people peaceably to assemble.” You may not have been able to stop President Trump from directing this appalling use of force, but you could have chosen to oppose it. Instead, you visibly supported it.

Anyone who takes the oath of office must decide where he or she will draw the line: What are the things that they will refuse to do? Secretary Esper, you have served honorably for many years, in active and reserve military duty, as Secretary of the Army, and now as Secretary of Defense. You must have thought long and hard about where that line should be drawn. I must now ask: If last night’s blatant violations do not cross the line for you, what will?

Miller ended the letter by saying, “I wish you the best, in very difficult times. The sanctity of the U.S. Constitution, and the lives of Americans, may depend on your choices.” [14]

Former Chief of Staff to President Trump, John J. Kelly, also came out with his own statement today that he is in agreement with General Mattis. [15]

“I agree with him,” Kelly said during a virtual panel discussion.“I think we need to look harder at who we elect,” said Kelly, who left the White House in January 2019. “I think we should look at people that are running for office and put them through the filter: What is their character like? What are their ethics.”

Kelly said police should be responsible for ending violent protests. “These are civilian responsibilities,” Kelly said. “We should be very, very careful before we contemplate sending in active duty.”

“This fall, it’s time for new leadership in this country – Republican, Democrat or independent,” said William H McRaven, the retired Navy admiral who directed the raid that killed Osama bin Laden. “President Trump has shown he doesn’t have the qualities necessary to be a good commander in chief.

McRaven, in an interview on the 76th anniversary of D-Day, noted that those wartime leaders inspired Americans with “their words actions and their humanity”.

In contrast, he said, Mr Trump has failed his leadership test. “As we have struggled with the Covid pandemic and horrible acts of racism and injustice, this president has shown none of those qualities,” Mr McRaven said. “The country needs to move forward without him at the helm.”

Powell said in an interview on CNN’s “State of The Union. “We have a Constitution. We have to follow that Constitution. And the president’s drifted away from it.”

“The Republican Party, the president thought they were immune, they can say anything they wanted,” Powell said. “And even more troubling, the Congress would just sit there and not in any way resist what the president is doing.”

“The one word I have to use with respect to what he’s been doing for the last several years is the word I would never have used before, never would have used with any of the four presidents I worked for: He lies,” Powell added. “He lies about things, and he gets away with it because people will not hold him accountable.

“protests over George Floyd’s death aren’t “a battlespace to be dominated,” as President Trump suggested.

The former NATO supreme allied commander told NBC’s “Meet the Press” that he thinks there are “plenty of people” in law enforcement, including officers and the National Guard, who can police the demonstrations without the military getting involved.

“Their real role is to protect these peaceful demonstrators,” he said. “This is not a battlespace to be dominated.

“There are sufficient forces to do that, and I think the military is very concerned about getting pulled into the maelstrom of politics in an election year in order to push protesters, as they were at Lafayette Square,” he said. “That was wrong.”

The Modern Military Association of America, a nonprofit organization for the LGBTQ military and veteran community, released this statement.[19]

“Donald Trump just crossed a very serious line that demands swift and forceful condemnation by every Member of Congress,” said the group’s interim executive director, Air Force veteran Jennifer Dane. “Promoting a letter that labels American citizens peacefully exercising their First Amendment rights as ‘terrorists’ is an egregious breach of his oath to preserve, protect and defend the Constitution of the United States. Now more than ever, it is absolutely crucial that Trump be held accountable for his reckless actions.”

The Washington Post published an op-ed critical of Trump over the weekend, co-authored by 78 former Defense Department officials, including four former Pentagon chiefs — two Democrats and two Republicans. It coincided with a statement, calling on the president not to use the U.S. military for political ends, co-signed by more than 280 retired diplomats, generals, and senior national security officials.

Among the 280 signatories were more than 20 retired generals.[20]

Here is a list of officials who have resigned under President Trump [21]. Many of them are voting for VP Biden. A well known Republican is Anthony Scaramucci.

Here’s a list of prominent Republican party officials who voted against Trump in 2016. [22] Notably, past Governor of OH and Republican Party presidential candidate John Kasich is included on this list.

As additional Republicans for Biden raise their voices, I will update this answer.

[4] Republicans for a New President

[8] Ex-Joint Chiefs chair ‘sickened’ by action against DC protesters, says not ‘appropriate’ to call in military

[20] Admiral from bin Laden raid: US ‘needs to move forward without’ Trump