What are some industries that will be completely changed or destroyed by COVID-19?

What are some industries that will be completely changed or destroyed by Covid-19?

I don’t think that there will be industries that will completely destroyed by the Covid-19 pandemic, but many will be substantially changed, for better or worse. Many industries and activities were already evolving or on their way out, but the effects of the pandemic will serve to only escalate that eveolution.

Education – As I write this (3/23/2020) , every college in the state of Florida where I live has now been closed, at least through the start of the Fall semester. Students are still taking courses, however, as classes have gone online via the internet. Even my other child’s high school classes have been moved online. We have had e-learning and the ability to take college classes for years now, but this trend will now accelerate. Physical campuses will probably never disappear, as there will always be a need for in-person educational needs. However, universities such as Southern New Hampshire University, which has promoted itself heavily, has already been highly successful in this new hybrid educational model as one of the early front runners. It is not only cheaper for the student, but also cheaper for the educational provider as they do not have to pay for costly lamd, physical facilities, student housing and other on-campus activities that traditional facilities currently have.

Cruise lines – Cruises will take a huge hit. It will be a long time before people forget the thousands of passengers stranded on cruise ships docked on Japan or off the coast of California where the virus was running rampant among the passengers. Cruises already have had major issues with noravirus outbreaks that have sickened hundreds at a time. Today, the cruise industry has come to a virtual halt with almost no ship sailing. Carnival, the world’s largest cruise line, has already announced they won’t even begin sailing again until May, at the earliest. That’s zero income for three months, minimum, which is a huge hit even for the most solvent of companies. Some smaller lines may never run again, and those that du will probably see much smaller numbers of passengers fearful of being victims of a repeat scenario.

Shopping – The move to online shopping will only accelerate now. A few things became very clear just in the last week, even in the single place where I live. First, malls are irrelevant for the most part. Every mall in my geographic area is now closed due to the pandemic and not a single store in them is deemed as being an “essential” business – one that is critical to sustaining life or basic economic functions such as grocery stores, pharmicies or banks. Literally everything I would want to get there I can now get online. Second, with panic buying resulting from the outbreak, many items went quickly out of stock at most stores and you were forced to drive around to see of you could find things such as masks, canned food and even bottled water for the anticipated weeks-long quarantine. Online shopping provides virus-free shopping from home with a better chance of finding what you need and getting it delivered right to you door, sometimes in as little as an hour. I would expect to see many, many more physical stores to close as a direct result of this by the end of the year as people stay away in droves.

Movie theaters – this was already a dying breed before the pandemic. Movies are expensive to see in person to begin with, tickets are $10 here for first-run films, and popcorn is even more. The last time we went to the theater to see the last Star Wars film it cost us around $70 for tickets, popcorn and a drink. AMC and Regal, two of the largest cinema owners in the country, have closed all their theaters down until at least April 15, a full month with zero ticket sales. The film industry can not survive without money coming in from sales. So what will happen? You’ll see more of the Netflix approach where films are made for direct-to-video viewing. The new film Trolls was supposed to have opened in theaters last week, but with the theaters closed the production company decided to release it straight to video-on-demand for $20 per viewing. That sound high, and it is by many standards, but the company thinks enough people will view it this way when they consider the point I made about how expensive it is watching a film at the local cinema. We will probably see more and more of this in the future, but the question remains, at least for now, as to what the magic price point will be to entice people to do this at home. In any case, you will see some smaller companies and independent theaters unable to reopen post-Covid19.

Food markets/food suppliers – When the severity of the outbreak threat was becoming more understood and believed, many people undertook panic buying in an attempt to get supplies before store were stripped or they were unable to get out and get them. As a result of panic buying, many stores found themselves unable to keep up with demand and had little choice at best and bare shelves at worst. My local Walmart was almost barren of canned goods, paper products, meat and fresh produce on several visits there recently. However, we have a local independent grocer here that remained well-stocked and still has a great selection of most products. Why the difference? They source locally, especially from dairies and farmers growing produce. The large chains have to rely on getting their good from far-away suppliers and manufacturers, then to their distribution facilities, then to the stores. Events such as shelter in place orders, natural disasters, road closures or airline closures can affect the flow of goods to these companies. When you sorce locally, you can in many cases get your goods much faster. Consumers here also respond more as they know exactly where their food is coming from and supporting local businesses and the local economy. Expect to see more of this, both at grocery stores, and by extension, to restaurants as well.

Government – If one thing the outbreak has done is that it has made perfectly clear that there was a complete breakdown in the way the the U.S. government responded to the crisis. President Trump had warnings given to him as far back as January and chose to ignore them, instead calling it a “Democratic hoax” and saying that it would “disappear like magic”. As shown in the chart below, the U.S. as of this post has the steepest infection curve of any nation, including China, at the same time in their curves. Other nations took much more aggressive action to contain the virus, including strict quarantines, decontamination of buildings and streets, total travel restriction, and containment of infected individuals, and in some cases testing of the entire populace. The U.S., on the otherhand, has done bits and pieces of these things across the country but there has not been any coordinated efforts on a national basis. 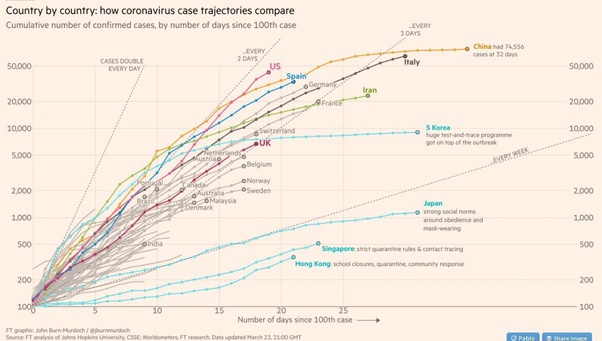 Healthcare – The pandemic has also made clear that our vaunted private healthcare system is much more broken that anyone wanted to admit. Extreme shortage of supplies from ventilators to even basic N95 masks showed that we were woefully unprepared for a pandemic of this size. Many people were moved into telehealth to “see” health professionals as visiting a doctor right now is highly discouraged to prevent the spread of the virus and to allow overstretched medical facilities to treat the infected with severe symptoms. Previously, Medicare did not allow senior to use telehealth, now due to the crisi they are. This will, I believe, become a permanent feature and only further grow as more and more people are moved onto the platform going forward.

International business / trade – I think there will be a sharp decline going forward in international business travel. Many companies have already put a halt on international travel due to the virus. More work is being done remotely via the internet and phone, and this will also be done in the future by augmented reality or virtual reality capabilities as physical trade fairs and conferences disappear.

Our world post-pandemic will end up looking much different that the one we have today. There will be a great many stuggles in the short term, but also tremendous opportunities for growth and transformation on an evolutionary scale if we embrace them.