Virtual Reality – as in, immersion in a strange world. Be that sitting in a racing car and competing against other drivers, or going around and around on a roller

Why are people excited about VR headsets?

It turns out there is a concrete, non-hype, definitive reason why VR is interesting and worth getting excited over. It has to do with how your brain interprets VR in contrast to other media, and it’s the core reason why VR is a fundamentally new type of entertainment (with an accordingly large economic opportunity).

When your brain processes VR content, it perceives and stores the sensory input as a real experience. Watching a movie or playing a game on a TV or computer screen is only interpreted and remembered as something you’ve watched. This has been validated by studies of memory strength and by using fMRI scans of the brain while immersed in VR.

The impact is so strong that it can be used to treat phobias, stress disorders from traumatic experiences, and actual pain. One of the early researchers in the field has gone on to found a startup, DeepStream VR, which uses virtual reality for clinical pain relief. The image below shows the impact of VR on an individual experiencing pain: 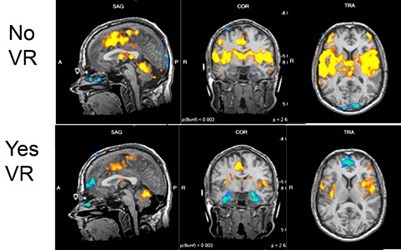 This heightened perception is a double-edged sword. Horror movies, for instance, can be legitimately traumatizing in VR – leaving horror directors and content creators to tentatively test out different techniques until they find a new horror “language” compatible with VR-based entertainment. Sexual harassment in VR multiplayer worlds is a real problem, and users find it sticks with them even after they log off; they have trouble just “shrugging it off” like they did in prior MMO worlds. VR will also test what happens in the real world when our brains become desensitized to “actually” committing acts of violence in VR – as opposed to “watching” acts of violence in today’s 2D games.

For people looking to make a buck, the economic opportunity is real and large, but in the end the reason why that opportunity exists is rooted in the cognitive significance of VR.