What will be more dominant in the next few years augmented reality or virtual reality?

Google’s Clay Bavor managed to perfectly explain this in <140 characters, it’s difficult for me to improve on his response: 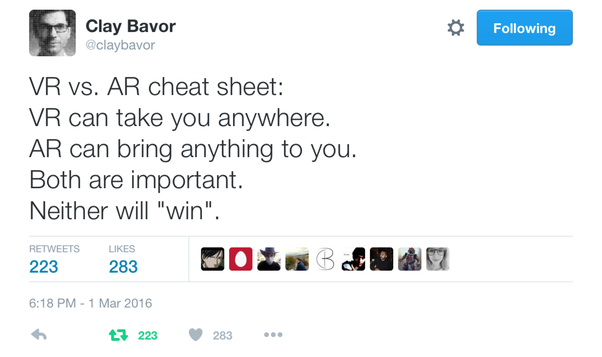 These are different technologies which, while related, are neither mutually exclusive nor entirely competitive. In the long term, I expect the line between the two to blur (an AR device that can generate sufficient opacity can emulate VR, a VR system with cameras to bring in the outside world can emulate AR) but in the near-term they have distinctly different missions, as Bavor so elegantly describes.

However, in 2017 I expect to see more VR than AR, mostly because the problems that need to be solved to provide a compelling VR experience at a (high-end) consumer price point are largely solved, while that’s not really the case for AR yet: computer vision and image recognition technologies need to improve, and be made more performant, characteristics like FOV (Field of View) need to improve, and price points need to be brought down significantly before consumer availability of AR systems from companies like Microsoft and MagicLeap (and, of course, Meta… but I wouldn’t bet on their long-term future.) I expect we’ll see consumer availability of first generation consumer AR devices around the time we see the NEXT generation of VR devices, within 2–3 years.

Right now, VR is better for a lot of entertainment experiences because it’s so immersive, and AR tends to be better for casual experiences and productivity scenarios because it doesn’t take over the user’s sensory inputs completely, and doesn’t have the same vestibular discomfort issues.