A New Kind of Open: Real Estate. With local businesses needing to adhere to the current regulations – they are finding new ways to remain open. This section is

What’s the worst thing about the Flint, MI water crisis? Is there any hope to rectify the problems?

The absolute worst thing about the Flint, MI water “crisis” was that it was a prime example of the tail wagging the dog.

The Merriam-Webster dictionary defined this as:

What actually happened is much simpler, but really impacts all of Michigan, not just Flint. Because all of the rest of Michigan has exactly the same problem.

Yes, you read that correctly. And it’s actually the fault of the real estate industry.

Here’s a condensed version of the whole story; fasten your seatbelt:

Real estate really got booming in Michigan in the 1960s. The auto industry was really doing well, and it pre-dated the “energy crisis.”

And so there was a lot of booming business in building, and the plumbing codes allowed for lead piping and solder. So lead pipes were put into new construction, everywhere.

Even though the first case of childhood lead poisoning was first described by a physician in 1892 in Brisbane, Australia, and we knew it could be dangerous.

Michigan has a lot of “hard water”. Hard water contains a lot of minerals, with some of those minerals being calcites, primarily calcium oxide and calcium hydroxide.

This is known as the mineral “lime”, which naturally occurs in water pumped out of lime containing aquifers — which is how the aquifers got there in the first place. In other words, when you pump your water out of wells, you get hard water containing dissolved lime.

It builds up in pipes, eventually choking them off, like so: 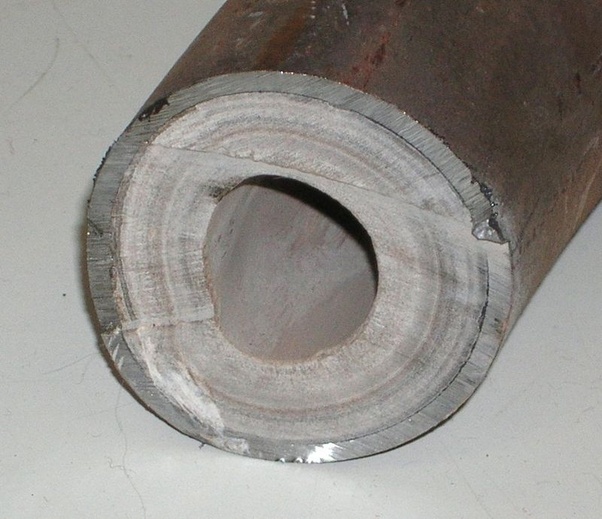 Remember that, because it sets the stage for what comes next.

Michigan was pretty progressive, and they’d been doing lead testing, and forcing people to re-pipe houses, and apartment buildings, well ahead of the 1982 ban by the EPA.

This is because they tested the water as it came out of the plumbing. But there was a movement afoot, and it scared the crap out of the real estate industry, to outlaw lead pipes altogether.

It was suggested that if you wanted to sell a house or a building, and it had lead pipes at all, you had to re-pipe with non-lead pipes before the building could be sold.

You can see why this was terrifying to the real estate industry; it would essentially kill all sales, because the old owners would have to bear the expense, and they’d want to pass it on to the new owners as an increase in the price of the building.

Only everyone knew that bumping up the price on the buildings was not an option, because by this time we were well into the “energy crisis”, and what looked before like it would be a slump in real estate because of the declining auto industry would become, well, a disaster. For the real estate industry.

And so they put their pointy little heads together, and decided that the only solution was to prevent the re-piping law from ever being drafted at all.

And they had a way to do that: make “test at the tap” the law of the land. Or at least all of Michigan. And being a big, wealthy, lobby they were able to get their version of the law passed:

And then proceeded to ensconce, as administrative and public policy in that department … test at the tap.

And the real estate industry was thus saved.

Flint was having budget problems.

Part of those problems was Detroit, which was in the throes of its own bankruptcy, start finding money everywhere and anywhere they could. And one of the places they could was in what they charged Flint for water.

But Detroit was really hurting for money. A city built on the automotive industry, and rumored to have only slightly less graft and corruption than Chicago, decided Flint was a golden goose.

And they bent them over on the price of the water. Hard.

Flint was now in dire straits. And not the good kind of Dire Straits, where you get your “Money for nothin’ and your chicks for free”. The bad kind.

They had been digging a new supply tunnel for themselves, but they really couldn’t dig that as fast as they needed to dig it, to switch water supplies, so instead they built a purification plant that ran off river water instead, and they … closed one valve, and opened another valve.

Detroit would have to find somewhere else for their money problems.

Perhaps they could consider spending less, instead of revenue-ing more? No one knew, because that approach has never been tried by any taxation supported bureaucracy in the history of mankind; we may never know if that strategy works… but there ends the involvement of Detroit in our little story.

Until it hit the lime.

And started eating it away.

And the real estate industry rolls on.

Someone sells a house. Oh look; we have a lead problem. You’re going to have to re-pipe your house because our “test at the tap” shows unacceptably high lead levels.

Like a skipping record, and no amount of jolting the table the record player was on would make it move onto the next verse of Stairway To Heaven, so you can go back to making out with your girlfriend.

Here’s the deal, though:

And the state, realizing that this problem impacted all of Michigan, not just Flint… also picked door number 4.

Because if they hadn’t?

They couldn’t pretend that this was a Flint problem, instead of admitting that it’s an all of Michigan problem.

It’s an all of Michigan problem.