How will virtual reality revolutionize education in the coming years?

Imagine walking along the rim of an active volcano or seeing ancient Roman ruins come to life before your eyes.

These days, you don’t necessarily have to imagine.

A wave of new edtech companies are using virtual reality to bring vivid experiences like these to the classroom, with advocates highlighting the technology’s ability to inspire and grab the attention of young minds.

“Kids love to engage with [VR] lessons,” said Guido Kovalskys, chief executive and co-founder of US-based edtech company Nearpod. “One minute, they are learning about Roman history, and the next, they are transported to ancient Rome and are exploring the Colosseum.”

According to Nearpod’s figures, more than 6 million students in the US and beyond have experienced its VR-based lessons, such as virtual field trips, after it began offering the service two years ago.

But with access to content still somewhat limited, just how widespread could the technology become, and could it reshape how lessons are taught? 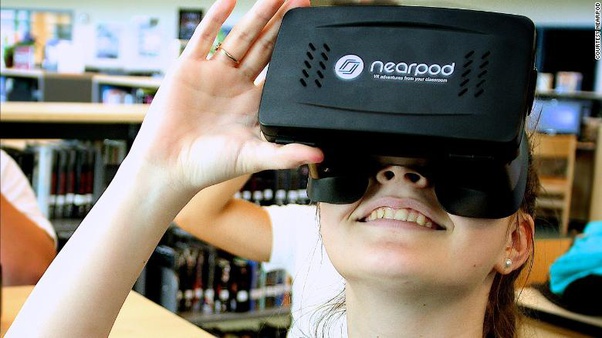 Jeremy Bailenson, a professor of communications at Stanford University and founding director of Stanford’s Virtual Human Interaction Lab, has been studying VR since the late 1990s.

He believes that VR should supplement classroom learning, not replace it. “It’s about using VR to shake it up and frame the other work being done in the regular classroom,” he said. “It’s about stepping away from the mundane stuff and experiencing something.

“Learning to conjugate verbs, for example, that’s not making the best use of VR. It works just fine on a blackboard. Doing something that requires you to watch but not move, that doesn’t really justify the use of VR.”

In his latest book, “Experience on Demand,” Bailenson explains that VR has the potential to democratize education by bringing travel and educational opportunities to those who otherwise couldn’t access them.

“You can take real world experiences and recreate them in a VR setting,” he said.

One Copenhagen-based company plans to use VR to bring the science lab to life for students. Labster’s immersive education tools and virtual labs are used in about 150 universities worldwide. Now, it is developing a new VR product range in partnership with Google.

“VR, over the last 30 years, has become more cost effective, and as a result easier to scale,” said Maaroof Fakhri, VR product owner at Labster. “Now, that technology is enabling more interesting educational tools to be developed.”

Labster has developed more than 70 web-based simulations for science students and is working toward migrating its simulations to VR, as well as creating new ones, to provide a richer experience for learners.

The company aims to engage students through “storytelling, narrative and interactive gaming elements,” Fakhri explained. For example, students learning about DNA can partake in a web-based simulation of a crime scene, hunt for clues and analyze their findings.

“VR offers a physical feeling of being in the lab, which gives students confidence when they progress to an actual lab environment,” Fakhri said. “Students can use it alone, at their own pace, repeat things, make mistakes, try the experiments a few times.”

According to Chian Gong, a principal at Reach Capital, a Palo Alto, California-based venture capital firm that supports education-focused startups (including Nearpod), VR is an area with “a lot of potential.”

However, it remains “pretty nascent” in the classroom, Gong adds. “That’s partly because of access to devices but also because there’s a lack of available quality content,” she said.

Experts are also still trying to understand the impact of VR on children’s learning. 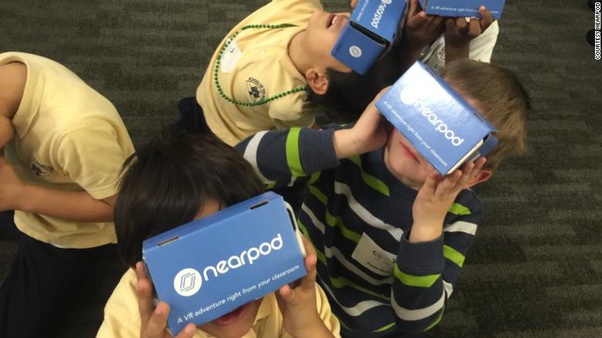 Research conducted by Bailenson and his team at their Stanford lab in 2008 looked at the potential psychological effects on young children using VR. In some cases, children who experienced swimming with whales in a VR environment developed false memories of having visited SeaWorld in real life.

Bailenson believes that concerns about VR use can be addressed in two ways: moderation and supervision. “I don’t just mean supervising the content that kids experience in a VR setting but also supervising the physical space for safety reasons,” he said.

Kovalskys agrees that VR should be used carefully. “VR is an engaging tool, but within a 35-minute lesson plan, it might only be two or three minutes,” he said.

And although Kovalskys believes that technology can play a greater role in the classrooms of the future, he does not expect a future without teachers. “Learning is a social experience. It is not only about learning content but learning to deal with others,” he said. “Teachers play a really influential role. Who knows where technology will take us, but I hope that doesn’t change.”