Billie Parrott, a broker at Meridian Real Estate, says company policies have changed to keep property buyers and sellers safe. As featured on

Do Trump voters agree with him that his prompt, effective handling of the COVID-19 pandemic justifies his 2018 firing of the White House pandemic response team Obama created, along with trying to slash the CDC budget & not replacing staff who leave?

One of the greatest successes of the Russian/Republican Influence Operation has been the annihilation of truth itself. It’s nearly impossible to argue policy with Trump cultists because they don’t believe the facts any such discussion would have to rely on.

Thus here you have cult members like Bob Smith saying “Who said he did this, fake news from CNN?”

Trump cultists don’t just believe the mainstream news has a liberal slant—which it does, to be honest. They also believe that the mainstream news, from the New York Times to CNN, lie all the time in order to attack Trump. It’s a big, big jump from slanted coverage to outright lying, but they’ve made the jump.

So you can say “Well Pulitzer Prize-winning factchecker PolitiFact, which calls lilberals out all the time for lying, along with right wingers, says this is true.”

You get the same response to anything you cite—even conservative publications like The Economist—unless it’s Fox News or one of the many far right astroturf websites like NewsMax.

But I’ll give it a shot anyway:

How about that noted Communist magazine Fortune?

“…The cuts started in 2018, as the White House focused on eliminating funding to Obama-era disease security programs. In March of that year, Rear Adm. Timothy Ziemer, whose job it was to lead the U.S. response in the event of a pandemic, abruptly left the administration and his global health security team was disbanded.

“That same year, the Centers for Disease Control and Prevention (CDC) was forced to slash its efforts to prevent global disease outbreak by 80% as its funding for the program began to run out. The agency, at the time, opted to focus on 10 priority countries and scale back in others, including China.

“Also cut was the Complex Crises Fund, a $30 million emergency response pool that was at he secretary of state’s disposal to deploy disease experts and others in the event of a crisis. (The fund was created by former Secretary of State Hillary Clinton.)

“Overall in 2018, Trump called for $15 billion in reduced health spending that had previously been approved, as he looked at increasing budget deficits, cutting the global disease-fighting budgets of the CDC, National Security Council (NSC), Department of Homeland Security (DHS), and Health and Human Services (HHS) in the process.

“The effects of those cuts are being felt today. While the CDC announced plans to test people with flu-like symptoms for COVID-19, those have been delayed and only three of the country’s 100 public-health labs have been able to test for coronavirus. The administration’s request for additional funding came roughly two weeks after officials said HHS was almost out of funding for its response to the virus.”

Did Trump Administration Fire the US Pandemic Response Team?

Their conclusion? Yes it did.

“In May 2018, the top White House official in charge of the U.S. response to pandemics left the administration. Rear Admiral Timothy Ziemer was the senior director of global health and biodefense on the National Security Council and oversaw global health security issues, a specialty that had been bolstered under President Barack Obama.

“After Ziemer’s departure, the global health team was reorganized as part of an effort by then-National Security Adviser John Bolton. Meanwhile, Tom Bossert, a homeland security adviser who recommended strong defenses against disease and biological warfare, was reportedly pushed out by Bolton in 2018. Neither White House official or their teams, which were responsible for coordinating the U.S. response to pandemic outbreaks across agencies, have been replaced during the past two years.” 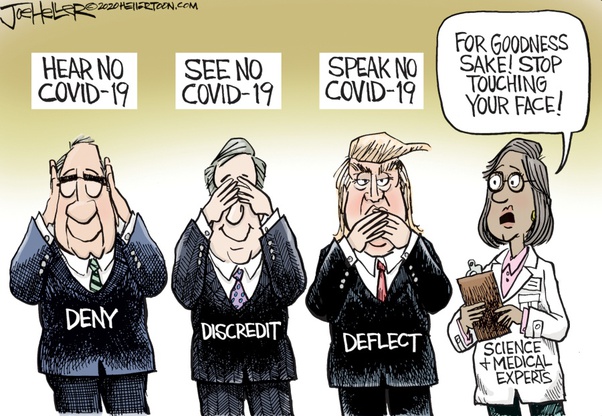 EDIT ADD: Bob Trammell’s answer in this thread is worth noting. I can’t reply to it because, like so many snowflakes, he has blacklisted me from commenting on his stuff (I don’t blacklist anyone—ever, BTW).

He and I have something in common: we both got social science BAs from UCLA. But it stops there. I always appreciate his answers, because they demonstrate a phenomenon that has been noticed by pollsters: even though most Trump cult members are not educated, those who are have the same opinions/beliefs as their undereducated brethren—they just use more and bigger words to express them.

This shows the power of ideology over native wit. Truth and reason are sacrificed for belief, just as all of us who attended Sunday School were trained to do (though many religions, to be fair, don’t expect you to treat the outside world as if the same rules apply).

First, he claims Trump didn’t exactly fire the team—he just disbanded it. This is quibbling over the meaning of the word. Same as happened with Ambassador Yovanovitch. Did he fire her? He yanked her from her post in Ukraine without notice, publicly smeared and humiliated her, and shortly thereafter she left government service. In my book he fired her. Walks like a duck, quacks like a duck. But feel free to call it something else—the bottom line’s the same.

Second, he defends disbanding the team because it wasn’t needed at the time.

Seriously? On that basis let’s disband all the nation’s fire departments, and only try to reassemble them as fires occur. Ditto FEMA. Ditto our armed forces. And let’s quit maintaining bridges. Just rebuild them after they collapse from lack of maintenance, and tell the families of those who died that they have our “thoughts and prayers.”

The trouble with pandemics is that they’re, well, pandemics. Look up the word. It means the thing is spreading more rapidly than you can respond unless you’re prepared beforehand. And then it will cost far more to reassemble what you need after the fact than it will cost to be prepared in the first place. Plus the loss of life.’

Trump is stepping over dollars to pick up nickels—and his cult followers applaud.

Next he says the President’s budget request is a “negotiating tool.” He isn’t negotiating with an adversary. It’s with his own party (in the Senate). And forgive me if I don’t try to read his mind. This isn’t a real estate developer negotiating with a trade union. I’m going to assume he actually means what he says until or unless he says otherwise. Talking about the Democratic House ignoring what he requests is a red herring. The Republican Senate can and will block anything the House does that doesn’t suit Republican priorities.

It’s Trump revealing his beliefs and priorities—which boils down to Trump putting his re-election before the lives of the people his office requires him to serve and protect.

Trammel says “What matters is he has quickly and effectively addressed the problem in spite of politicalization of the coronavirus by democrats and liberals.”

Well, that’s exactly what Trump constantly brags about having done.

But it’s not what has happened. We are vastly behind other affected countries in dealing with this. We don’t have more than a tiny fraction of the test kits needed. His travel ban is bizarre. He has excluded countries with fewer per capita cases and included ones with more. His messaging is that the focus should be keeping the disease out of the country.

But it’s here and spreading rapidly—not from visitors from abroad, but from Americans carrying, with each carrier affecting an average of over 50 people. The virus puts a far heavier viral load in carriers’ sputum and saliva, making it stunningly contagious.

We knew it was here in January. His response has been to serve and protect…the stock market. At all costs. He has muzzled the epidemiologists and stepped in front of them to share his own very stable genius expertise about disease. His messaging has been variable and often contradicting what the experts are saying, and he has attacked the experts who do tell us the truth.

We’re not just unprepared in terms of what the government is doing, but also in providing stable, consistent leadership to tell us what we should be doing. At ever single state he has done less than he should and told us to do less than we should.

For anyone to believe that he has provided the leadership needed in this national emergency would require that they unplug all their reasoning capacity.

If only Biden were President already. He would not be second-guessing the medical experts and serving the short term needs of the stock market.

Those who voted for Trump can be excused to some extent. Those who still support him, however, have no excuse. It will mark them with shame for the rest of their lives.