What is the difference between augmented reality and mediated reality?

10 THINGS YOU MUST KNOW ABOUT VIRTUAL REALITY AND AUGMENTED REALITY

Virtual Reality is an artificial environment that is created with software and presented to the user in such a way that the user suspends belief and accepts it as a real environment. It is a simulated, three-dimensional reality that the user can be completely immersed in, needing only some goggles, headsets or other head-mounted viewing device. 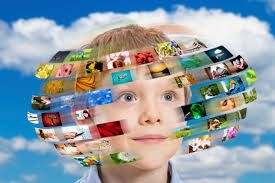 Augmented Reality is the integration of digital information with the user’s environment in real time. Unlike virtual reality, which creates a totally artificial environment, augmented reality uses the existing environment and overlays new information on top of it.

Both virtual reality and augmented reality are similar in the goal of immersing the user, though both systems to this in different ways. With AR, users continue to be in touch with the real world while interacting with virtual objects around them. Virtual reality work better for video games and social networking in a virtual environment, such as Second Life, or even PlayStation Home. Augmented reality is integrated synthesized effects with the user’s natural environment. While VR is totally immersive, transporting the user into a whole new world, AR adds additional information to the surroundings that the user is already in.

Virtual reality has been adopted by the military – this includes all three services (army, navy and air force) – where it is used for training purposes. This is particularly useful for training soldiers for combat situations or other dangerous settings where they have to learn how to react in an appropriate manner.

Education has adopted virtual reality for teaching and learning situations. The advantage of this is that it enables large groups of students to interact with each other as well as within a three dimensional environment.

The entertainment industry is one of the most enthusiastic advocates of virtual reality, most noticeably in games and virtual worlds. But other equally popular areas include: Virtual Museums, Galleries, Theatre, e.g. interactive performances, Virtual theme parks, Discovery centres.

Companies use virtual reality to help with data analysis and forecasting trends in order to gain an edge over their competitors. One example of this is a system developed by researchers at the University of Warwick which is designed to help businesses gain a greater understanding of their data.

Healthcare is one of the biggest adopters of virtual reality which encompasses surgery simulation, phobia treatment, robotic surgery and skills training. One of the advantages of this technology is that it allows healthcare professionals to learn new skills as well as refreshing existing ones in a safe environment. Plus it allows this without causing any danger to the patients.

Virtual reality engineering includes the use of 3D modelling tools and visualisation techniques as part of the design process. This technology enables engineers to view their project in 3D and gain a greater understanding of how it works. Plus they can spot any flaws or potential risks before implementation.

There are many more uses of VR than first realised which range from academic research through to engineering, design, business, the arts and entertainment, fashion, construction. But irrespective of the use, virtual reality produces a set of data which is then used to develop new models, training methods, communication and interaction. In many ways the possibilities are endless. 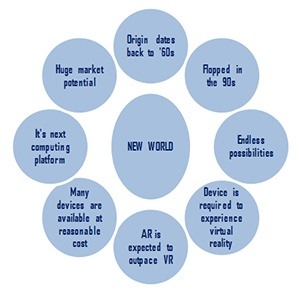 Virtual reality origin lies in late 60’s and the technology has seen a downward trend in 90’s because of image resolution, immersive sensation, heavy gadgets, cost and availability of gadgets which was overcome later. Virtual reality makes a gigantic comeback.

ACCORDING TO DIGI-CAPITAL: virtual reality market was worth about $1.9 billion in 2016, but that’s expected to climb to $22.4 billion by 2020. Those numbers include both software and hardware sales. And when you factor in AR sales, the market skyrockets even higher. The combined AR and VR market will be worth $121 billion by 2021.

ACCORDING TO CSS INSIGHTS: Worldwide AR headset sales could hit $1.2 billion by 2017.

ACCORDING TO AN ISACA SURVEY: 73% of Americans stated they were “knowledgeable” about the Internet of Things (IoT) and AR markets. 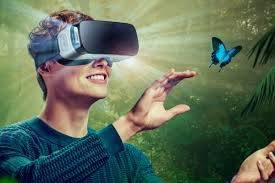 VIRTUAL REALITY HEADSETS: The first type has a screen built in to the headset. These devices connect to a computer and require a pretty powerful system to operate smoothly. They have great graphics and perform well. A few popular examples of these include the Oculus Rift, the Vive, and the PlayStation VR, which connects to the PlayStation 4 game console.

The other type of headset houses smartphone and uses its screen as the display. These don’t require a computer and run completely off of apps on your smartphone. Some popular examples include Google Cardboard and the Gear VR.

For more info and free consultation on AR / VR projects. Please connect us at: