Real estate is the main business for 256 of the world’s billionaires, Hurun says. By Fang Block. | Originally Published On March 20, 2020 | Mansion

How serious is income disparity in Hong Kong?

Hong Kong’s Gini coefficient was 53.7 in 2011.  That puts it well ahead of famously unequal societies such as Brazil and Mexico.  The only countries in the world with more serious income inequality are Botswana, the Central African Republic, Columbia, Guatemala, Haiti, Lesotho, Sierra Leone, and South Africa [1].

These people pay very little in taxes.  HK has no taxes on dividends or capital gains.  The top corporate income tax rate is 16.5% and profits deemed to be sourced from overseas are not taxed.

It’s worth noting that, unlike in (say) the U.S., not many of the super-rich in Hong Kong got that way by creating innovative products or businesses.  Their wealth mainly derives from typical “rent-seeking” industries such as telecoms, utilities, and (especially) real estate development.  These are not industries where you get rich just by making your customers happy; you do so by seeking out government favoritism.

Now let’s look at the bottom of the income distribution.  The main source of suffering by the poor (and everyone else) in Hong Kong is astronomical housing prices — the highest on the planet, having doubled since 2009.

This is a cage home. 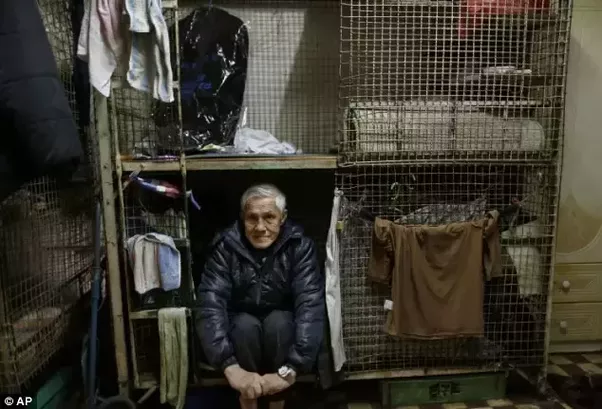 It is literally a cage.  They are stacked one on top of the other.  There were around 50,000 people living in places like this as of 2007[3] (likely many more now with the surge in property prices but I can’t find a reference).

This is a cubicle home. 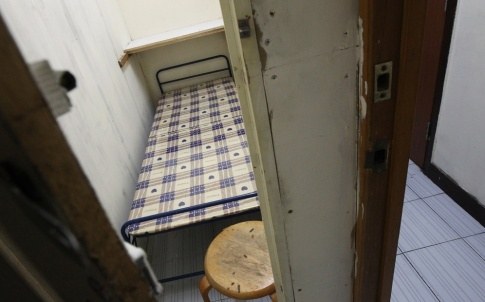 By the way, contrary to popular belief, Hong Kong is not at all physically constrained by a lack of land.  40% of its land mass is totally undeveloped pristine parkland, and another 30% is other (non-park) undeveloped space.  In other words, all this suffering is totally gratuitous.

But remember that all the tycoons make their fortunes in real estate and that will tell you who has a vested interest in maintaining the artificial shortage of housing.

[1] The World Factbook
[2] Where home is a metal cage: How tens of thousands of Hong Kong’s poorest are forced to live in 6ft by 2ft rabbit hutches
[3] Caged Home
[4] Cubicle living grim reality for poor