The USB-C standard port has been a part of many of our portable devices for quite some time now. This is especially true when it comes to smartphones,

This is an interesting design question that probably doesn’t have a clear answer that anyone outside of Apple can say definitively – But I will speculate.

The technical differences that are important with cables and ports are primarily the power transfer, data transfer and physical characteristics.

In order for the iPhone to use it’s fastest charging mode it does need to have the power supplied by a USB PD (Power Delivery) enabled power adapter and a USB-C to Lightning adapter, since the standard charging cable is missing two new pins that are implemented in USB-C. [1] Yes, the iPhone can use the USB standards even if it chooses to not use the USB connectors – that’s the nice thing about open standards, they’re always predictable. [2]

The data transfer rates on the lightning port are theoretically capable of USB 3.0 since the iPad Pro can achieve this with an aftermarket cable.[3] I couldn’t find any good information on what the iPhone was capable of, but the cable can do USB 3.0 at least. Even so, USB 3.0 is still only half as fast as USB 3.1 (5 GB/s vs 10 GB/s), so it’s safe to give the edge to the USB-C cable since this one supports USB 3.1 and the lightning cable can only support USB 3.0.

If you consider how important charging speed is for cell phones, and how unimportant the data transfer speed is – it seems that Apple chose the part of the USB standard that really mattered and didn’t worry about the transfer speed. But why would the port be different?

With all the electronics side out of the way – the decision was likely driven by the physical dimensions of the USB-C port being very slightly larger than the lightning port. The difference is slight, but smartphone design is a game of millimeters. [4] 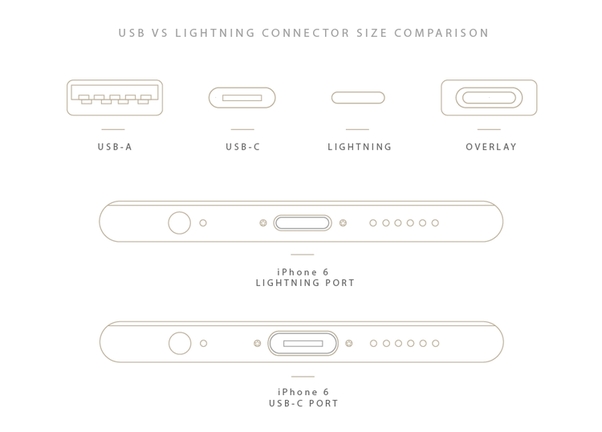 Additionally, the Lightning plug is the Male end of the connector and the Lightning port the female side, which potentially makes the cheap cable more likely to take accidental damage than the very expensive phone. All of the USB cable/port designs have had the cable hold the female connector and the devices have the male connectors, which was a big problem with the Micro-USB ports and cables and may have turned Apple off the whole concept years ago.

And the one that is the most obvious of all – Apple knows that they sell enough phones that a 3rd party accessory market will exist to make cables and docks. As long as the standard that they make is as good or better than the other options, they can dip into that revenue stream by licensing the technology to other companies. If they used an open standard, they wouldn’t be able to collect those fees. The scale of Apple means that they have the money and technical talent to make a standard that is good enough even though it’s not compatible – it’s not a stretch to think that Samsung, Google, Huawei, or LG would do the exact same thing if they sold 15% of the worldwide market and 44% of the US market. [5]

[2] How does fast charging work? Here’s every single standard compared