Is it more likely that Northern Ireland would want to become an independent country rather than reuniting with Ireland?

Northern Ireland as a stand alone Independent country would be economically unviable .

Northern Ireland relies on a subvention in the Billions from Westminster to keep its economy going.

The dependent nature of the NI economy has become endemic, with handouts from Whitehall replacing the urge to pay for itself. This is evidenced again by the DUP’s approach to propping up May’s government which has nothing to do with making Northern Ireland self-sufficient. You can add another Billion pounds / bribe by May to keep the DUP onside .

The public sector In Northern Ireland accounts for 37% of the workforce. When measured relative to population.

You also have to factor in the 30 year conflict of the Troubles that stagnated and stymied the Northern Irish economy. War is not good for any economy especially a low scale sectarian civil war that the North experienced. It drew away any chance of FDI, Well they did manufacture the DeLorean car there so that counts for something.

If we go back to 1920, 80 per cent of the industrial output of the entire island of Ireland came from the three counties centred on Belfast. This was where all Irish industry was. It was industrial and innovative; northern entrepreneurs and inventors were at the forefront of industrial innovation. By 1911, Belfast was the biggest city in Ireland, with a population of close to 400,000, which was growing rapidly. It was by far the richest part of the island.

In contrast, the rest of the Irish economy was agricultural and backward and the only industrial base we had could be termed a ‘beer and biscuits’ economy, dominated by the likes of Guinness and Jacobs.

Fast-forward to now and the collapse of the once-dynamic Northern economy versus that of the Republic is shocking. Having been a fraction of the North’s at independence, the Republic’s industrial output is now ten times greater than that of Northern Ireland. Exports from the Republic are €89 billion while from the North, exports are a paltry €6 billion. This obviously reflects multinationals, but it also underscores just how far ahead the Republic’s industrial base is. Producing 15 times more exports underscores a vast difference in terms of the globalisation of business.

The total size of the Republic’s economy is now four times of that of the North, even though the labour force is not even two and a half times bigger. In terms of income per head, the Republic is now almost twice as rich per person as the North.

The average income per head in the Republic is €39,873, while it languishes at €23,700 up North. The differing fortunes of North and South can be easily seen in the fact that, having been smaller than Belfast at the time of partition, the population of the greater Dublin area is now almost three times bigger than the greater Belfast metropolitan region.

The Republic of Ireland is the 6th wealthiest country per capita in the world. The UK as a whole lags twenty odd paces behind at 27th.

Immigration is a good indicator of economic success. People move to places where they feel their kids will have a better life.

Today in the Republic one in six people are foreign-born. In Northern Ireland it is one in a hundred.

If immigration tells you about foreign people’s choices, direct foreign investment tells you about the choices made by foreign capital. Since the Good Friday Agreement, American corporations alone have invested close to $400 bn (£312bn) in the Republic. This is equivalent to 56 years of the British Government’s annual subvention to keep Northern Ireland afloat!

At the moment, the Republic’s budget deficit is 1% of GDP. If Northern Ireland had to pay for itself in the morning, the budget deficit would be about 22% of GDP!

Economically, the Union has enfeebled the North while independence has enriched the Republic – particularly since the peace process. Commercially, there was a huge peace dividend, but it went to the Republic of Ireland.

The demographics in Northern Ireland from the 2011 census tell the story that many in The Republic don’t want to absorb.

The most interesting statistic shows the proportion of Catholics and Protestants in various age groups. Of the elderly, those aged over 90 in Northern Ireland, 64% are Protestant and 25% are Catholic. A total of 9% had no declared religion.

When you look at those children and babies born since 2008, the picture changes dramatically. The corresponding figure is 31% Protestant and 44% Catholic. In one (admittedly long) lifetime, the Catholic population in the youngest cohort has nearly doubled, while the Protestant cohort has more than halved.

Even given the fact that 23% of parents of infants declared themselves as having no religion, we seem to be en route to a united Ireland.

Up to now, it has always been argued that a significant number of Northern Irish Catholics believe that staying with the UK was the right thing to do for their back pocket. But when you look at the numbers, you can see that this would be a bizarre choice.

The Demographics do not support a will for an Independent Northern Ireland ,

Under the Good Friday agreement an All Ireland approach to the Economy has Intergraded sectors such as Agricultural, tourism and Energy, so as they have a synergy effect between North and South .

The Catholic population of children, as a percentage of the total, has nearly doubled in 90 years while the Protestant population has practically halved.

In the over-90s the religious split is 70 per cent Protestant and 28 per cent Catholic. There are just over 10,000 people over 90 in the North. Children of the 1920s, they are the first generation born in the newly created Northern Ireland, and the religious split in this age group demonstrates the demographics that underpinned partition.

Now look at the population in Northern Ireland, from the same census, of children under five. There are 147,000 under-fives, and this age group is 48 per cent Catholic and 37 per cent Protestant.

So, between the births of these two groups, 90 years apart, the Catholic population of children, as a percentage of the total, has nearly doubled while the Protestant population has practically halved. 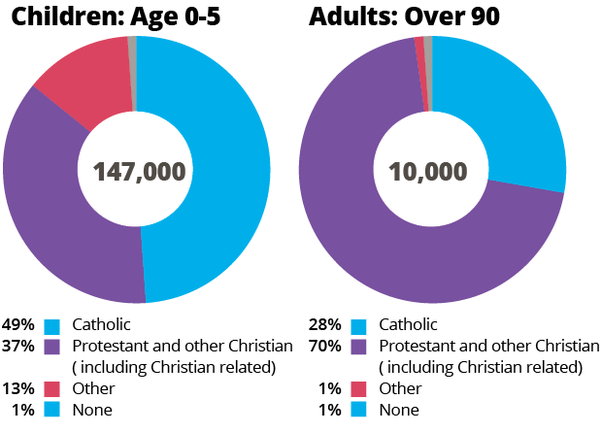 Every politician needs to be aware of these facts when considering Brexit and the future relationships on this island. They help us to forecast the political future of the North using numbers rather than opinions or slogans.

Extrapolating from these figures, you can calculate that Catholics will become the absolute majority in Northern Ireland around 2036,(others have suggested it could be as soon as 2021) and this majority will only strengthen from then on. That’s less than 20 years away. The Good Friday Agreement was signed 20 years ago, and it seems like only yesterday.

What does all this mean? It means changes are coming, and coming quickly.

But could the Republic absorb the North economically? To answer this, we have to understand that the two economies are very different. The union with Britain has been an economic calamity for Northern Ireland. All the people have suffered, Catholic and Protestant, unionist and nationalist.

Demographics are leading to a changed North, The dream of a united Ireland might not be the end point. Some Northern Catholics may want to remain in the Union, which ironically could be more attractive if the Catholic population were in the majority, because they’d have the power without having to pay for it.

Also, many people in the Republic might baulk at the unification bill. But the demographic patterns pose the most significant and immediate challenge for unionism, because, within a generation, democratic politics in the North will come down to whether unionism can persuade nationalism to keep Northern Ireland intact.

With all these variables taken in to consideration they do not support an Independent Northern Ireland. As a stand alone entity it would not be able to join the EU. Spain with its Catalonia problem would veto any break away entity from Joining the EU . With no subvention from the Westminster coffers they would not be able to sustain the public sector jobs that take up almost 40% of the economy.

At the moment, the Republic’s budget deficit is 1% of GDP. If Northern Ireland had to pay for itself in the morning, the budget deficit would be about 22% of GDP!

That deficit does not make Independence attractive .

The rest of the Uk is very much Indifferent to Unionists. whose outdated beliefs, have left them relics of the past in their now secular, progressive country. Northern Ireland lags behind the rest of the Uk in Issues such as Gay marriage, abortion rights .

Ethnically, without Scotland, the union of Northern Ireland and a multicultural but nationalistic little England is not particularly coherent . The English are very ambivalent and very ignorant about Northern Ireland. Indifference best sums up how they feel about the Province. It’s very distance in their minds.

Brexit Supporters have indicated that they would ditch Northern Ireland in a heartbeat , It has never been a priority in their minds .

“The power in any relationship lies in the hands of the person who likes the other less”…..this sums up the dynamic in the relationship between Britain and Northern Ireland . the love for the most part is one way and unrequited.

Demographics are shifting toward a united Ireland . that does not automatically mean there will be a United Ireland . Nationalist would have all the power without having to pay for it should they have a majority in population .

Unionists would have to convince Nationalists to remain within the United Kingdom in that scenario.

With Brexit looming and the concrete and more profound underlying changes in demography, the issue of a united Ireland may be back on the table quicker than most of us imagined – or cared to dread.

Interestingly, Unionists have now an economic incentive to join a united Ireland because the Union is impoverishing them, but I suspect they’d prefer to get poor in a semi-detached UK rather than join a much more coherent all-Ireland economic endeavour.

It is unfashionable to say it, but the Union has been an economic disaster for both tribes in Northern Ireland.

This Channel 4 News segment will give you an Indication that there are the beginnings within Unionism who are looking toward the possibility of a united Ireland .

Channel 4 News has learned that some respected figures from the liberal wing of unionism are now ready to talk with the government in Dublin about Irish unity – and even a border poll. (Side note Professor Dornan is Jamie Dornan’s Father.)

Who knows what the future holds , what is certain An Independent Northern Ireland is not a likely Scenario outside the movie “Divorcing Jack”

In the end of the day it will be Economics and Demographics that will decide the future of Northern Ireland. Unionists might have more power and Infulense in a United Ireland then they would in a post Brexit Britain that has shown little interest or understanding in the Dynamics of Northern Irish Politics,