What would you tell someone who is considering moving to Silicon Valley, California?

What would I tell them?

I would tell them that they are in for a world of hurt. Unless they are moving from overseas, they can expect a significant downgrade in their standard of living. [edit; poorly worded, but I’m referring to the willingness of an immigrant to overlook the awfulness, being compensated by the opportunity.]

California has the highest total tax rate in the country. People ignore this like it’s just a fact of life, but it is not. Any other state is less, even living in NYC is less. Indeed, you can pay CA taxes or you can pay for college for your children. Many a stock option lottery winner does what they can to not pay taxes, for many ‘commoners’ the difference between CA taxes and, let’s say Texas taxes, is the difference between retiring at 50 versus 60.

To pay taxes here, you must work additional X years no matter how much money you make.

This house, please review the specs, just sold for 1.8 million:

Oh, look at this gem valued at a mere 1.5 million, and it’s right next to a busy street and semi-conductor factory: 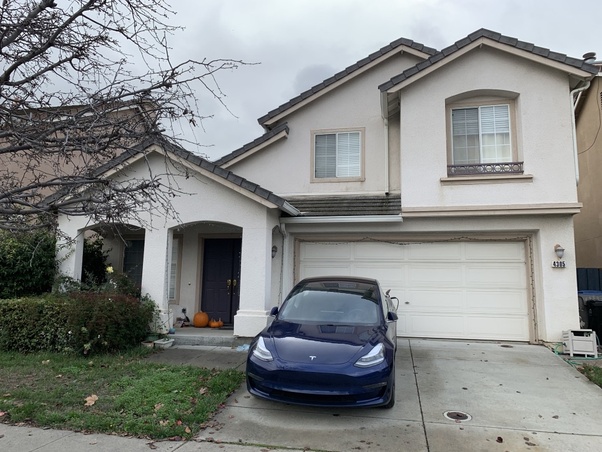 Note the yard in January, with the October pumpkins and christmas lights up. As of July, the yard looks much worse. The house is not in good shape. But they have a Tesla.

So classic: small, ugly tract home, not taken care of, yard looks like shit, houses flanking each side with a 5 foot gap, Tesla in the driveway.

Imagine – none of your neighbors keep up their houses. Entire neighborhoods of tech professionals with run down homes, ugly yards, zero pride or care. Why? Some of it is because they’re too busy. Some of it is because they don’t have any money for a gardener, nor time to do it themselves. And, to my own amusement, some people, not Americans, think working outdoors in the grass is beneath them. An ugly, rundown home is not though.

How do you get that money? Well.. not from tech. The people who can do this have money from other ventures from other countries. That should be a very serious red flag for any possible real estate investors out there. Market conditions here involve unknown variables and a global marketplace (absolutely not local).

Here’s a house in a stellar school district. I chose it because it’s in one of the lowest crime rate areas in the state. The bay area has some of the highest crime rates, and San Francisco was more dangerous than 98% of all cities. It has since come down to 95% of all cities. All bay area cities suffer crime much higher than most american cities. (For those of you who have been around, East Palo Alto is now one of the safer areas.)

So why do so many go to the Bay Area?

Can you believe that shit?

Not for beauty. Not for education. Not for any reason other than a job.

All of the money they make? Those billions and billions? All of that money goes into these buckets:

It’s a shameful place really, with shades of the Robber Baron era from the railroad and steel boom. But the Robber Barons, eventually, did great things with their wealth. I doubt the current caste of rich kids will do jack shit with theirs. We’ll see.. some of the billionaires here aren’t even 40. Maybe they’ll take after Bill Gates, who was a Robber Baron himself and now, in a very trendy fashion, donates his money late in life.

I moved away. Silicon Valley isn’t ‘my people.’ You might have better luck, but I hope you have money and I hope you don’t come looking for love.