New York financial giant The Blackstone Group, which has been on a real estate buying binge in Southern Nevada for years, purchased the Bellagio for more

Will the USA see a real estate crash in 2019 due to rate hikes?

Right now, experts believe that unwarranted rising interest rates along with global trade wars could be enough to send US housing markets crashing.

Rates are rising fast (70% higher) and that alone can create inflation and prevent home buying given how high home prices are in places such as New York, California, Texas, and Florida.

President Trump is angry about the Fed’s desire to raise rates to cool the economy, which may not actually be that red hot until next spring. 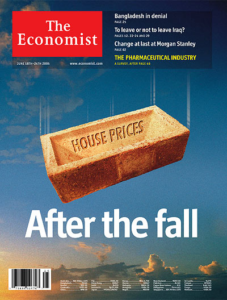 Some experts believe the US Fed launches recessions with unreasonable rate increases. In fact, every recession or major catastrophe has been aided by fast rising interest rates. These rate spikes kill off business and put extreme pressures on mortgage holders. Markets crash quickly then interest rates are quickly lowered.

The transition to a US centered economy puts the country into a vulnerable period of uncertainty and GDP risk. Companies are hoarding products from China right now while the tariff is 10%, but on January 1st 2019, it will be 25% and that should stop imports completely, especially if the US dollar should weaken. Will companies build factories here or instead hold off and hope for a Trump loss in 2020?

Unfortunately, “soft landings” after rate hike cycles are as rare as unicorns and virtually all modern rate hike cycles have resulted in a recession, financial, or banking crisis. There is no reason to believe that this time will be any different — Forbes report.

But what happens when Malinvestments in Europe and Asia become visible and crashes begin to happen there?

Markets crash when you least expect them to. After reading this post, you’ll see how easy it could happen from California to Texas and New York to Chicago. What will stop the dominoes from falling?

“Don’t we learn from history?” Perhaps history can only tell us that the housing market is going to crash but can’t really say when or how it will happen, particularly in any city. You’ll read about the likely factors below.

This recent chart from Case Shiller shows the volcano like shape of the last collapse. What’s different about this new rise is the unsteady, less steep climb, upward. Those halting steps could show the fear of investors and homeowners and how panic might be bigger factor this time. Alternatively, it could show housing market resilience.

Subprime mortgage default started it last time, but will something else launch the avalanche for the next one? Will a global recessionary tsunami rocket to US shores?

Zillow polled 100 economic experts about the economy and they believe a recession is coming in 2020. 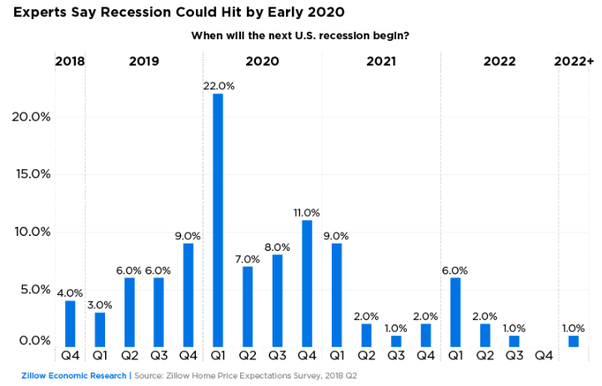 Housing crash warnings have been sounding for many years both here and in China, which means the pressure for a big crash has been building. China is in trouble and so is Canada. With pressure, the human element, the human reaction, built on expectations built up by obsessively negative anti-Trump propaganda, could be sufficient to launch a panic-induced collapse. A panic meter might be the most significant crash signal.

A small statistical event then might only be needed to spark a crash event (like an ember at a California summer campfire).

What Are the Key Housing Crash Factors to Watch?

There are numerous housing crash factors discussed below from geopolitical events to trade related to rising interest rates, the end of stimulus spending, and excessively high home prices. A trade war with China could be crash factor #1. Will debt, deficits, and tariff barriers be the issues that start bursting housing bubbles? Will it be political opposition by the democrats and meddling within the US? 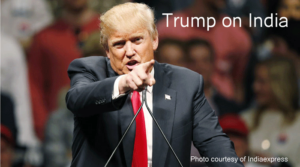 Trump Volatility: America First policies are working for US economic health, but trade wars can fester quickly like a wild fire and cause much pain in the short term.

Certainly the recent comments of the President that “Trade Wars are Good” don’t help settle the panic. Trade tariffs, strong inflation and cost of living rises, along with high mortgage rates and the adjustment to new protected market economies are serious threats. Even Trump supporters are worried about the transition ahead in 2019.

In this post we try to take an objective look at the unthinkable. At least, it’s unthinkable for some that booming markets in Los Angeles, San Fransisco, Sacramento, San Jose, Seattle, Denver, Las Vegas, Dallas, Charlotte, Boston and Miami could possibly collapse.

Others can’t wait for the bubbles to burst so they can finally buy a home. Irrational thinking that can create strange events.

Is the Toronto housing bubble (worst in world now) the future for US cities? If the China housing market crashes, will the reverberations hit the US markets? What an interesting but scary phase of US history this is.

When Will Local Market Bubbles Burst?

If you look at the forecasts for all the bubbled up city markets such as San Francisco, San Jose, Los Angeles, Miami, Houston, Seattle, New York and Boston you’ll likely think back to prices before the last crash. 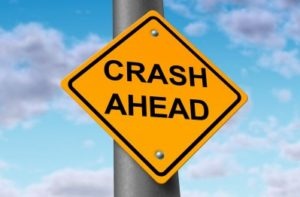 Take a look at the 12 Top Crash Factors listed below to help you decide whether buying a house or rental apartment is still a wise decision.

Check the state of the US housing market right now and 2018 forecast.

The recent stock market correction gives us pause for thought about how volatility can factor into a housing crash. However, the housing market is healthy with home construction rising and it will be a long time before demand is satisfied.

Mathematicians have studied housing bubbles, such as The University of Pennsylvania, and their HOUSING BUBBLE STRUCTURAL MODEL AND HYPOTHESES models couldn’t figure it out. The factors they studied do play a role, but housing bubbles and crashes are likely a cultural phenomenon (outside of major recessions). It comes down to values, attitudes, dreams and panic emotions.

There are some financial market players who make their fortune on crashes and if consumers are miffed about the direction of the market, it would be fertile ground for crash talk.

As long as Americans are employed with rising wages and growing GDP, housing crashes aren’t likely. Yet, a few experts such as Harry Dent are convinced a housing market disaster looms in the next few years. Even Anthony Robbins is speaking up about it in a video below.

A growing number of homeowners and buyers are talking housing bubble. With prices stable, economy strong, and demand persistent, why would so many feel the market could crash? Is buyer and seller pessimism enough to launch a sudden collapse?

Have a good look at the current housing market along with the residential markets in cities such as Boston, Houston, Seattle, Sacramento, Chicago, and Los Angeles. If you or your family are considering buying a home or condo, it’s wise to understand the macroecomic as well as human factors (Trump’s saboteur competition).

There’s two camps on the 2019 crash issue. First those who see the unbelievable period of economic growth in the US and believe it has to end and who see the end of Free Trade as a forboding sign; and secondly, those who see only positive signals and the solid political footing of the Trump administration in its resolution to bring good paying jobs and industry back to the US.

Even if the US is headed for greater things, it doesn’t preclude the possibility of a major market correction in housing. But for housing to crash, a series of factors would have to align.

A key factor is a recession. Right now President Trump is heralding an era of trade protectonism. While this policy can work very well for the US, it sends big economic shocks to formerly dependent economies such as China, Indonesia, Mexico, and even Europe.

These countries are full of boastful bravado about their ability to stand on their own two feet without the US, the reality is the abruptness of the protectism wave might be too much. If these economies collapse, including a China housing market collapse would a Tsunamai be sent toward US shores that would send into recession. Right now, this could be the number one threat.

The world’s economies have become tightly woven and a fast release might be too much to handle resulting ina global recession and accompanying housing market crashes.