Interestingly, infrastructure projects such as roads meant to open up hitherto inaccessible areas turned out to be a double-edged sword for real estate

What are the maximum number of take-offs and landings that can take place from a single airport? How much does adding runways help?

If you take a look at Chicago Ohare (Chicago O’Hare International Airport), they have the record in 2018 as the busiest airport with nearly 904,000 takeoffs or landings. With 10** runways running 365 days/year, 24h/day, that works out to more than 10 takeoffs and landings per runway every hour… basically, every six minutes there is a takeoff or landing, which is amazing. (I used to live in a high rise in Chicago, and it was impressive to see the arriving aircraft lined up and perfectly spaced in the sky for landings.) Basically, the bird (airplane) lands, taxis off, and there is a short buffer before the next one comes in.

OHare sits on about 12 sq miles or 7,627 acres per Wikipedia; the longest runway is over two miles long and half a football field wide (13000 x 150), but every runway needs to be serviced by taxiways, a portion of a terminal, separation from other runways so that you can be landing multiple airplanes in parallel. 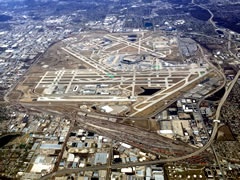 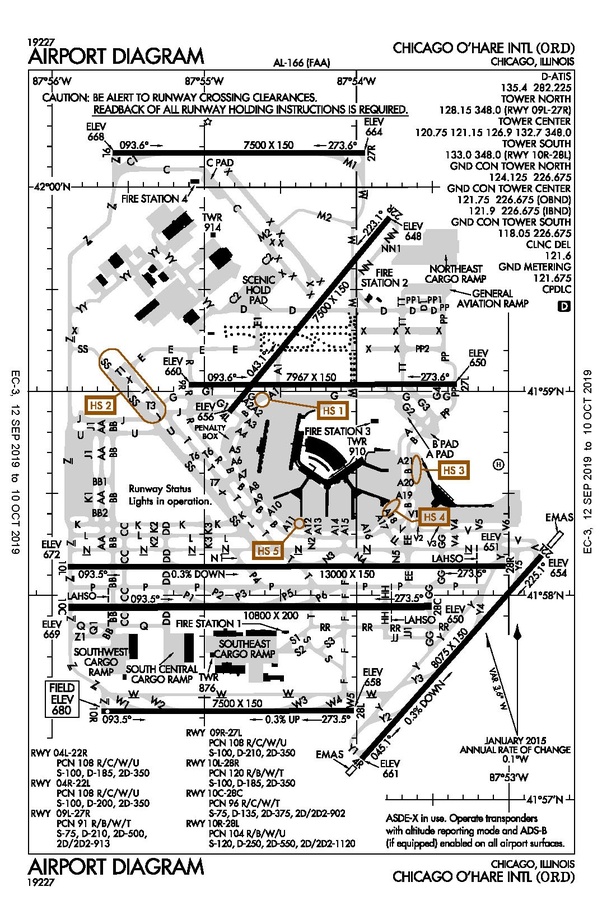 You need to have parking for people and workers. You need places to keep airplanes that are having maintenance or spending the night, etc. Your runways need to be oriented in a particular direction to take advantage of the prevailing winds, but you might want to have some alternate runways for when the winds are changing; this keeps your busy airport from shutting down if the winds change. You need roads in the facility to move the passengers and cargo, and the appropriate roads to the airport area. You need buffer for safety. You need a tower large enough to manage the traffic.

Long story short: airports are a lot about real estate.

The current Denver airport (DIA) is miles from the original Denver Stapleton airport; this has to do with length of new runways they wanted to support (16000′) as well as to allow aircraft sufficient time to climb over the Front Range Rocky Mountains.

They couldn’t easily or economically make those additions to the Denver Stapleton airport. So yeah, they added runways and made a new airport, and it cost them $4.8B dollars to do that. But it was probably cheaper than trying to grow Stapleton. Interestingly, DEN is 33,457 acres or about 4x the size of ORD, yet it doesn’t handle the same load as ORD; DEN handles 1652 landings per day, whereas ORD handles 2553 landings per day or 50% more despite being 1/4th the size. For those keeping count, DEN has 6 runways, so that works out to about 11 landings per hour… basically the same as ORD. Put another way, the six runways at DEN require a lot more space than the 10 at ORD, primarily because of the altitude at which it operates. IOW, not all runways are created equally.

In other words, more runways help, but it is much more than throwing down a road that a plane can land on.

As someone pointed out, while the math works out to 10 takeoffs/landings per hour or every six minutes, the actual number is quite a bit higher. This is because not all of the runways are active and in use; some of them will only be used during certain weather conditions.

I found a reference to capacity planning for ORD, in which they are modeling as many as 292 takeoff and landings each hour over six runways! That is a TO or landing every ~1m14s!

If you figure that aircraft in the terminal area are separated by at least 3nm for wake turbulence and that your typical 737 lands at about 130knots, that works out to about 1m24s separation between landing aircraft. (The models look like they are best case).

Anyway, those guys in the tower are busy! And those guys flying the airplane are busy landing and getting off that runway for the next guy!

My apologies: I just see that I miscounted the number of runways at ORD. There are currently 7 active runways and one official helipad. Two runways were closed in 2015, and 9C/27C is being built. This changes some of the math, but not the conclusions.

World’s Busiest Airports This is the world’s busiest airport