Why does Trump say America first but his policies do the very opposite?

1 Short Answer Trump says “America First” and his policies deliver the opposite because neither he nor his advisors understand modern growth economics.

1.1 The Evidence Let’s look at the evidence by asking “In what way has Trump made “America First” and how have the largely Republican Party of the USA created “Firsts” for the American people? 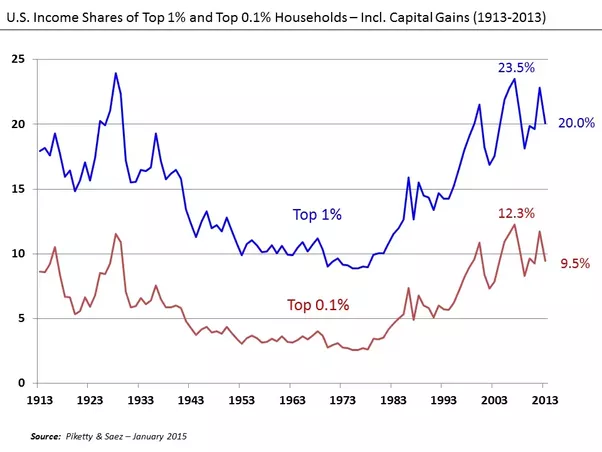 Between 1980 and 2015, the US income share of the top 1% of families doubled from 10% to over 20%, re-creating one of the circumstances of inequality of the Great Depression.

The most economically signifiant thing POTUS Trump has done is to cut corporation taxes from 35% to 21% in December 2017, thus awarding $125bn (or about 0.63% of America’s $19.8tr GDP at RPP) pa to the very rich company owners of the USA.

Trump’s “YUGE” Tax Cut for the Rich where these numbers are suggested. 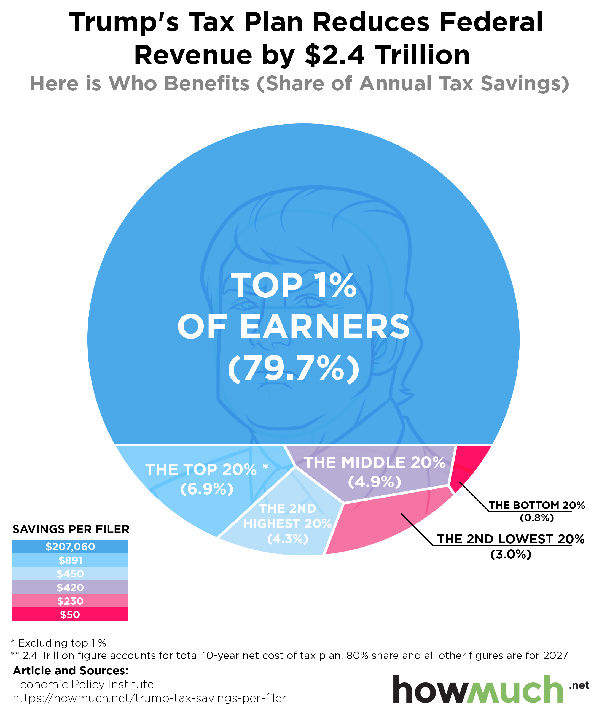 I think the top 1% of households wiil get about $125bn a year, because the average real corporation tax rate paid in the US is likely to be at most about 31% – about two-thirds of the 14% gap been 21% and 35%. I think that large US businesses are good at legal tax avoidance so very few would be paying 35% Corporation Tax. Arguments can be made that the real rate of paid corporation tax is likely to be between 25% and 30% so the cut to 21% is unlikely to be quite as large as it seems. But on the other hand an increase in company profits will probably cause a US stock market boom of about 15%, which will be a great advantage to rich shares-holding dividends-receiving households.

I think the minimum increase in income of the top 1% of households is likely to be at least about $125bn, trying to take all of the above into account.

The cut in corporation taxes is responsible for the current Wall Street boom. Capital gains and larger shares dividends will push both of the above graphs of the richest household incomes upward in 2018.

If increases the share of national income by the richest households produced higher economic growth, the USA would have had an economic boom between 1980 and 2015. It hasn’t – in fact the average rate of US economic growth, perhaps mainly due to the August 2008 Credit Crunch, seems to be reducing on a long-term trend.

The extra money awarded to the already rich is now mostly flushed abroad into anonymous corporations or trusts to avoid taxes. The Paradise Papers tell us a lot about that.

See What do the Paradise Papers reveal about the world’s wealthiest individuals?

Trump appears to have has fallen out with the FED perhaps because finding the counterpart funds of an extra 1% or so of US GDP for each of the next ten years from now on, either through foreign borrowing or through FED credit support of the US borrowing (which is currently running at about $4tr. – 25% of the US debt of about $20tr) does not ultimately look sustainable. The FED has far used “quantitive easing” – no borrowing, just credit creation – to fund that $4bn.

Such a pity Americans do not understand the productive use of investment credit creation high-growth economics, as FDR and JKG once did and applied. See FDR’s American Economic Miracle 1938-44, or the First Economic Bomb – The USA from 1938 to 1944 (Part 1)

All of Trump’s actions are financial, affecting the distribution of incomes but not the real economy, thus altering perceptions and who gets what but having no affect on the underlying weak productivity of the US economy. He and his advisors appear to have no idea about how to act otherwise.

America reduced its share of the global economy from 40% in 1960 to about 26% in 1980. Despite cyclical economic growth recovery between 1980 and 1985 and again between 1995 and 2002, the above graph shows that the forces creating the economic decline of the USA to about 22.5% of the world are much more powerful than those of growth recovery.

George Tait Edwards’s answer to How can you compare the industrial strength of nations? which provides the Table 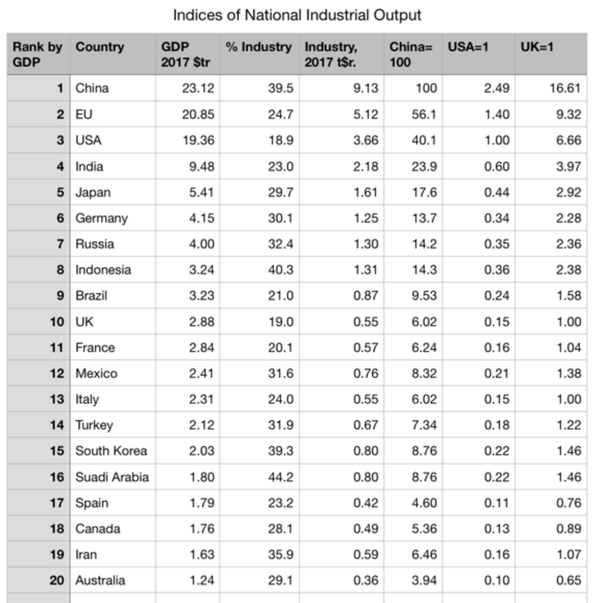 For detail on the fall of the US hegemony, see Section 8 of

George Tait Edwards’s answer to Are there any countries which used to be industrialized but, within the past 50 years or so, have fallen out of the developed world?

4 Americans Are The First In The Queue To Receive Nobel Prizes, but American Economists Achieve This Distinction By Economic Theories Devoid Of Economic Realism and Practice

The USA has not apparently benefited from these laureates. There is no data which indicates any economic benefit whatsoever. 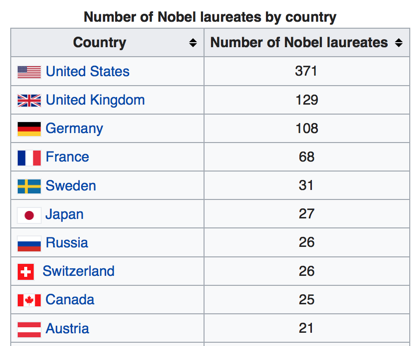 When we turn to Nobel Prizes in Economics, the picture seems similar. Out of the first eleven such prizes awarded, six have American alma maters. See List of Nobel Memorial Prize laureates in Economics – Wikipedia

The word “theory” crops up in four of these awards. 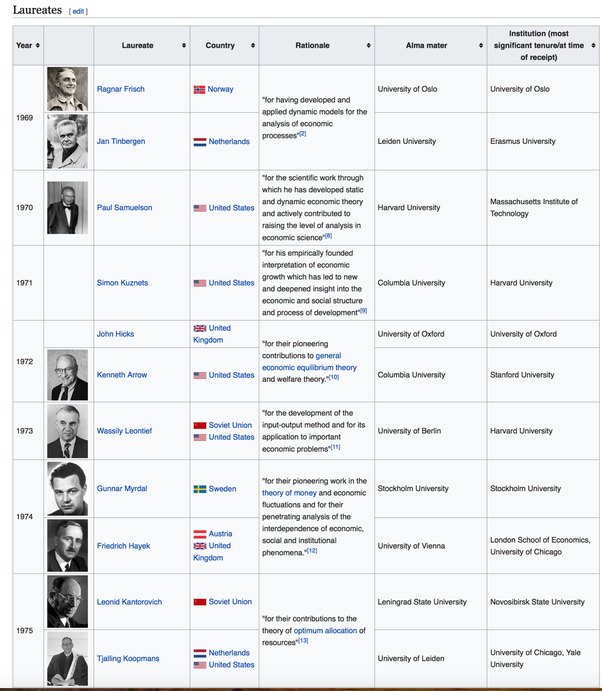 None of these economists is is any way associated with a practical prescription about how to accelerate economic growth.

Dr Osamu Shimomura (1910–89) was the author of Japan’s “Income Doubling Plan 1960–70” which was adopted by the Ikeda Government and which doubled Japanese living standards between 1960–66, and he was (judging by results) a truly great master economist. None of the above Nobel-listed economists has any track record approaching that achievement.

Dr Osamu Shimomura was considered, according to the book referenced below, for a Nobel Prize in the 1970s. Neither Dr Shimomura (who always wrote in Japanese and whose works have never been translated into English) nor the post-war Japanese Governments have wished to share Shimomuran high-growth economics with the western world. That policy provides a great trading advantage to Japan. This Committee-edited book maintains that policy, telling you how important Shimomura was in post-war Japan but neglecting to explain how he did it. 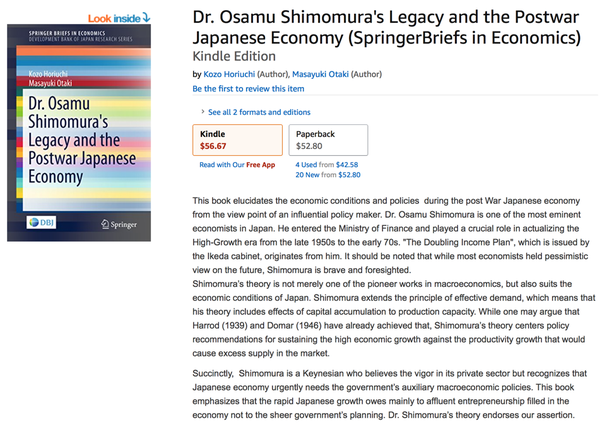 Fortunately there has been one great Japanese-American economist, Professor Kenneth Kenkichi Kurihara (1910 – 1972) and an Australian economist called Kenneth Bieda and in more recent years the German-born fluent-in-Japanese master economist Professor Ricard Werner who have all understood many key aspects of Shimomuran economics.

The Key Relevance of the Writings of Professor Kenneth Kenkichi Kurihara

How China Surpasses The EU and the USA, or The Seven Pre-Requisites for High-Growth Shimomuran… 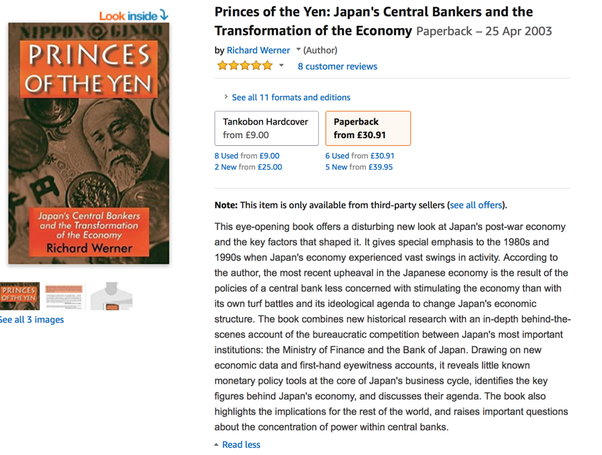 Here’s part of my review of that book: 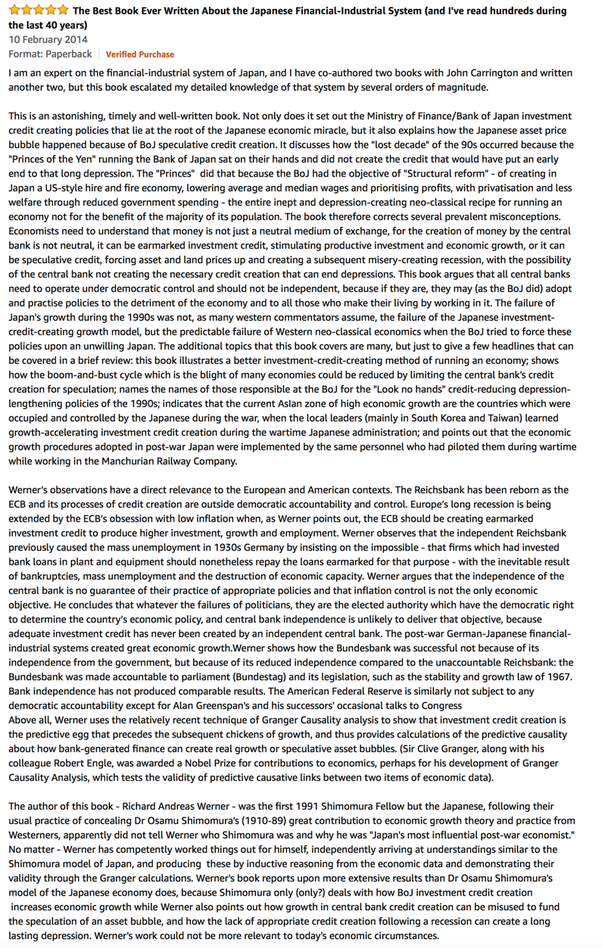 and in case you think of accepting the Springer book about Shimomura’s historical importance and think his insights might not be relevant to today, read

How China Surpasses The EU and the USA, or The Seven Pre-Requisites for High-Growth Shimomuran…

All eleven of Shimomura’s major works are in the Library of Congress. They have never had any effect on US economic policy or US economists despite FDR’s use of investment credit creation to win the Second World War. See

US Sources for several of the Works of Dr Osamu Shimomura (下村治, 1910–1989) -Eleven in the Library… and finally try realistic economics at

That realistic economics is probably the best future of mankind.

Trump has blamed the economic predicament of the USA on many of the other nations in the world. He has blamed Mexican Immigrants for rising criminality and stealing US jobs, he has blamed Canada for an unfair North American Free Trading Agreement (NAFTA), he has blamed Europe for not paying its share of defence expenditure, and he has blamed China for dumping cheap steel and many other items in the US, and has blamed the EU for the excellent deal achieved about Iranian nuclear containment and he has repudiated that deal and finally he has withdrawn from the Paris Agreement on Climate Control in the mistaken belief that he knows better than most of the scientists in the world. The magazine Forbes agrees with Trump while providing evidence of global warming See

Underwater: Rising Seas, Chronic Floods, and the Implications for US Coastal Real Estate (2018)

The EPA Eliminates a Strong Safeguard Against Industrial Air Pollution

6 “America First” May Mean That America Has Become The First Nation Where A Modern “Caesar” Has Become President, As Predicted by Oswald Spengler In The Decline of the West

Instead of the laurel wreath, the orange wig, and instead of singing while Rome burns, Trump twitters on a daily basis while America declines.

8 Conclusion None of these”America First” achievements seem admirable. Trump says ”America First” because he does appear to know, in economic terms, what he is doing.