Do you think it’s a coincidence that Matt Groening predicted Donald Trump’s presidency in The Simpsons, and now has his first new television series in 19 years?

The Simpsons made one joke about President Trump in Season 11, Episode 17: Bart to the Future, which aired way back in 2000. 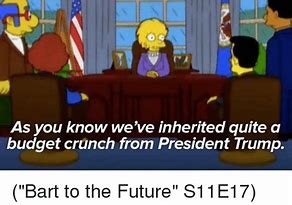 “The story was really about Bart saving Lisa’s presidency,” episode writer Dan Greaney tells The Post’s Comic Riffs. “Lisa has a problem beyond her ability” — the kind that only Bart can solve.

But how did the series arrive at a President Trump? Greaney explains that the real-estate mogul was just the right comedic fit at the time, and notes that they needed a celebrity name that would sound slyly absurdist.

Besides, Greaney says, “He seems like a ‘Simpsons’-esque figure — he fits right in there, in an over-the-top way.”

The Harvard-sprung Greaney makes no great claim of political prescience, noting, “I never would have predicted this campaign.”

But really, isn’t that just what THEY want you to think? Huh? Huh? Huh?