Paramount Group is hoping to fetch more than $400 million for its East Side office tower at 900 Third Ave. The company hired Cushman & Wakefield sales

Is the US trying to become a tax haven or is this just a happy accident?

The U.S. is known for its stance of “getting tough” on U.S. citizens’ foreign tax havens, but itself remains a welcoming tax haven for foreigners who are taking part in their respective countries’ capital flight.  Foreign capital inflow is positive for the world’s biggest economy, which is less susceptible to distortions compared to EM economists with more pronounced “hot money” boom (even though there are strong evidence in the U.S. real estate sector that resemble a hot money induced bubble – more on this below).

Nevertheless, this is not a new phenomenon, and institutions such as Rothschild are unfortunately late to the game.  Chinese millionaires and their local intermediaries have been taking advantage of accommodative U.S. policy on foreign capital inflow for decades.

Indeed, the U.S. is a very popular destination for China’s wealthy individuals, and the reasons for their capital outflow mirror those in the aforementioned Bloomberg article: 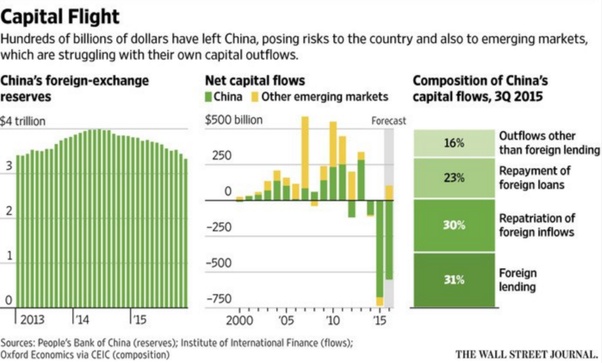 The end result: Why Are Chinese Millionaires Buying Mansions in an L.A. Suburb?

A year ago the property would have gone for $1.3 million, but Arcadia is booming. Residents have become used to postcards offering immediate, all-cash deals for their property and watching as 8,000-square-foot homes go up next door to their modest split levels. For buyers from mainland China, Arcadia offers excellent schools, large lots with lenient building codes, and a place to park their money beyond the reach of the Chinese government.

The city, population 57,600, projects that about 150 older homes—53 percent more than normal—will be torn down this year and replaced with mansions. The deals happen fast and are rarely listed publicly. Often, the first indication that a megahouse is coming next door is when the lawn turns brown. That means the neighbor has stopped watering and green construction netting is about to go up.

This flood of money, arriving from China despite strict currency controls, has helped the city build a $20 million high school performing arts center and the local Mercedes dealership expand. “Thank God for them coming over here,” says Peggy Fong Chen, a broker in Arcadia for many years. “They saved our recession.” The new residents are from China’s rising millionaire class—entrepreneurs who’ve made fortunes building railroads in Tibet, converting bioenergy in Beijing, and developing real estate in Chongqing. One co-owner of a $6.5 million house is a 19-year-old college student, the daughter of the chief executive of a company the state controls.

Arcadia is a concentrated version of what’s happening across the U.S. The Hurun Report, a magazine in Shanghai about China’s wealthy elite, estimates that almost two-thirds of the country’s millionaires have already emigrated or plan to do so. They’re scooping up homes from Seattle to New York, buying luxury goods on Fifth Avenue, and paying full freight to send their kids to U.S. colleges. Chinese nationals hold roughly $660 billion in personal wealth offshore, according to Boston Consulting Group, and the National Association of Realtors says $22 billion of that was spent in the past year acquiring U.S. homes. Arcadia has become a hotbed of the buying binge in the past several years, and long-standing residents are torn—giddy at the rising property values but worried about how they’re transforming their town. And they’re increasingly nervous about what would happen to the local economy if the deluge of Chinese cash were to end.

Back on the street corner, Ornelas and Mark agree to meet for coffee to discuss other deals. Before he drives away, Ornelas asks if the developer wants to speak with a reporter. Mark declines, saying he tries to keep a low profile. “See?” Ornelas says as he pulls away, leaning toward the passenger seat and raising his eyebrows. “Everything’s hush-hush here in Arcadia.”

The U.S. also has favorable programs such as EB-5 Immigrant Investor Program, which is very popular with wealthy Chinese as a form of asset diversification.  This is the explicit way for the U.S. to attract foreign capital into U.S. communities. 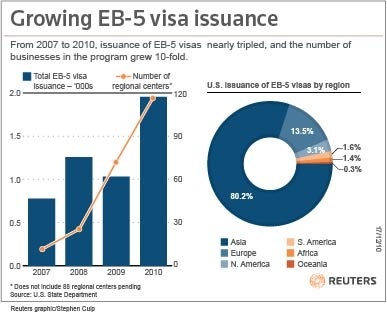 The EB-5 program has the following requirements (source: About the EB-5 Visa):

Commercial enterprise means any for-profit activity formed for the ongoing conduct of lawful business including, but not limited to:

This definition includes a commercial enterprise consisting of a holding company and its wholly owned subsidiaries, provided that each such subsidiary is engaged in a for-profit activity formed for the ongoing conduct of a lawful business.

Note: This definition does not include noncommercial activity such as owning and operating a personal residence.

Once a foreign investor has acquired legal U.S. resident status, then the bank accounts would be protected from the prying eyes of foreign governments.

In conclusion, foreign capital inflow into the U.S. is encouraged by friendly policy and is a near-term positive catalyst for the U.S. economy (even though the distortive effects come with negative consequences).  In the world of finance, the U.S. banking system (as a policy instrument of U.S. policymakers) can easily exert weigh on foreign banks to force them to reveal U.S. citizens’ tax haven holdings, but the reverse does not hold true.

As of 2016, the U.S. is beginning to crack down on real estate purchases that may be associated with illicit money, after decades of foreign capital inflow into the U.S. real estate sector: U.S. Will Track Secret Buyers of Luxury Real Estate.  Tax haven “evictions” will likely have to wait.