An exhibit both online and at St. Paul Area Association of Realtors reminds us of the real estate industry’s legacy in creating today’s socioeconomic disparities in

What are some modern conditions that are a legacy of slavery in the United States and how can I act against it?

This is a very difficult question, mostly because while we can make some good guesses, there’s no way to prove to our complete satisfaction that a problem is rooted in slavery. But I think we can make some educated guesses.

To begin with, slavery is a much more recent experience than we tend to think. As amazing as it is, I’m old enough at 61 that when I was a boy, there were living Americans who had been born into slavery. Only a few generations separate us from the harms of that brutal era and I think that the consequence of that are many.

Perhaps the most obvious one is the rapidly-closing but still significant gap between levels of education and income between black and white Americans: 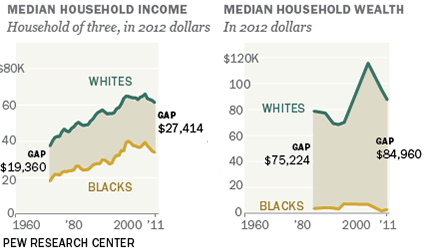 I often hear white people ask why, now that most of the apparatus of segregation has been dismantled, black people don’t just equal the educational attainment of whites. But much of what we learn we don’t learn at school. Studies have found for example that the more educated a child’s parents, the more words the child is exposed to. They’ve also found that poor parents devote less time to interacting with the child. And this gap, dating back to a time when slaves were denied education and even literacy for fear that they would revolt, means that black children enter school at a disadvantage compared to white children — one that isn’t easily overcome and that can snowball.

Another well-known legacies of slavery are high rates of crime — it has been posited that the slave had no moral reason not to steal from his master (who was, after all, stealing his labor) and often had to steal just to survive. And unfortunately, after just a few generations, this behavior is till to some extent with us, even though it is counterproductive.

Yet another is a tendency towards familiar violence. The more a child is disciplined violently, the more likely he is to be violent when he grows up. This leads to high levels of black-on-black violence in the black community and, unfortunately, it is a self-perpetuating cycle. It isn’t much of an exaggeration to say that the child who suffers corporal punishment is feeling the master’s whip of 150 years ago.

Back in the 1970’s, Daniel Patrick Moynihan got in trouble for suggesting that the breakup of families on the plantation led to high rates of illegitimacy in today’s black population. This is a problem that has actually gotten worse, as society has relaxed its strictures on extramarital sex and single parenthood. Unfortunately, studies now indicate that children who are raised by single parents don’t do as well as children who are raised by both, and that the absence of a father is particularly harmful to boys. That the mother typically has to work, sometimes two shifts, makes the problem even worse.

Then there is the whole apparatus of racism that evolved during slavery and led to Jim Crow segregation. Until 1964, segregation was legal and widely practiced in both the North and the South. In the South, it was backed by law, but in the North, it was practiced as well and was in a sense more insidious, because there were no laws to point to. When I was growing up in Manhattan, for example, black friends couldn’t live below 96th Street; the real estate agent simply wouldn’t offer an apartment to a black person. Black people were excluded from many of the best schools (mine, to its credit, was an exception) and universities. Entire industries and occupations were off limits to black people.

The typical story of white immigration in this country was that the immigrants themselves took low-paid jobs as laborers; their kids graduated high school, and entered skilled blue collar occupations; and their grandchildren went to college. So while there were exceptions, it usually took three generations. We have not yet been three generations from the Civil Rights Act and Affirmative Action. Even when I got to college in 1972, I was shocked by how few black students there were on campus. One of my few black classmates went on to become governor of New York State. Another black student who attended my school some years later, and a beneficiary by his own account of Affirmative Action, would go on to become president of the United States. So when opportunities become available, they are sucked up quickly like a dry sponge. Still, we feel the legacy of those years of exclusion; many black Americans have joined the middle class, but many others remain stuck in ghettos where unemployment is above 50% and like whites who have fallen out of the middle class in recent years many of them become trapped in self-defeating behavior.

Finally, I want to talk about some less tangible aspects of the legacy of slavery. Psychologist have in recent years become aware of the fact that trauma can be transmitted down through multiple generations. Jews, for example, often suffer from the legacy of the Holocaust; I’ve had friends whose parents survived concentration camps, and they suffered from their parents trauma. I believe that slavery has left an emotional imprint on both black and white Americans. For black Americans, it may mean low self esteem, low expectations, a sullen anger that may or may not manifest itself, and a sense of victimization. All of these things can interfere with self betterment. Studies have found that the performance of minority students on exams and at college can be improved dramatically if the kids are given confidence-building exercises.

It seems to me that my own family’s history of enslavement (I’m visibly white but have some black ancestry) has affected us in many ways — in particular, a legacy of abandonment, but also a great difficulty in doing anything for ourselves, as opposed to others. Many years have passed, but the emotional imprint remains and is reinforced through the generations — despite the fact that being visibly white, we were spared discrimination. For those who were not, who are reminded every day of the color of their skin, the difficulties are even worse.

Years ago, my father took some poor kids from Harlem into my family’s summer camp on scholarship. The results were dramatic. In only one summer with upper middle clas kids, their vocabularies increased by leaps and bounds. Perhaps more important — some years ago, my brother ran into a kid who had been in my group, and he said that that experience had changed his life because, as he put it, it old him that he could succeed in that world.

It’s so easy for those of us who grew up with middle class comforts to underestimate the gulf between the experience and horizon of kids growing up in poverty without expectations of success and our own. We have to be aware of that, and of the emotional scars that are still with us. And the thing is, I think we can and will continue to make progress if we keep that in mind, if we avoid the human tendency to bemoan our own challenges while dismissing those of others. Whether it’s a future president who benefited from Affirmative Action or a kid whose life was changed by a few months in summer camp, it’s amazing how much can be accomplished with a bit of understanding and good will.