The conversation was held in the YJP Mansion, designed by Escobar, and explored The Future of Real Estate as it relates to design, the co-economy, rent

What are the signs of a real estate bubble? Are we in one currently ?

“Unfortunately, bubbles are only recognized with 100 percent certainty in 20/20 hindsight,” says the man who accurately predicted the 2008 housing crash and the beginning the current housing slowdown.

James Stark, who manages well over $1 billion, thinks we are on the edge of another real estate downturn. This opinion goes against many other investors who think that the ‘bad blood’ has been flushed out of the real estate market since the last crash.

So what’s going to happen? Are we going to have another housing meltdown?

The truth is that nobody knows for sure. It’s impossible to accurately predict the future with exact certainty. However, we can take a look at a variety of indicators, as well as the opinions of some of the top investors in the world.

Even if we can’t predict the future exactly, we can paint a picture that will give us clues where the real estate market is headed.

Some like to argue the dates, saying that this is not the longest bull market in history. But, regardless of what the official record is, no one can disagree that markets have done very well over the past decade.

There are many reasons for the market’s success. We can point to the strong tech sector, low interest rates, and general world peace. We can also assume that the lows of 2008 should be matched with equal and inverse highs which we saw in 2018.

However, just like everything in life, the markets are cyclical. And if we are somewhere near the very top of a bull market, then it’s not hard to see that it may be time for markets to correct, which inevitably will pull down real estate alongside.

Believe it or not, we actually have pretty good records of worldwide historical interest rates. In fact, we know that the interest rates we have seen over the past decade are some of the lowest is 5,000 years. 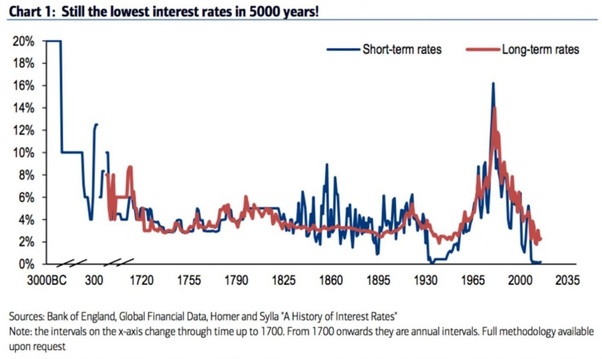 That sounds unbelievable. How could we have just had the lowest interest rates in recorded history? Well, let’s not argue the facts, but instead look at the results.

What has happened since rates have been (artificially) suppressed? The stock market, real estate, private equity, and nearly every single asset class you can think of has risen in value. That’s because money has been cheap to borrow, which has in turn raised the monetary value of any asset that can be bought with borrowed money.

Now, what’s going to happen when the cost of borrowing money goes up? The assumption is that prices of assets will go down. This is simple supply and demand economics. When there is more money supply, sellers can demand a higher price.

No where in the economy are interest rates more important to the average person than in real estate. That’s because the cost of borrowing money for home buyers directly correlates to the price of the house they can afford.

One of the (unfortunate) results of the American dream is NOT the total price of a house you can afford. It’s what MONTHLY payment you can afford!

Of course this is an extremely subjective and inaccurate blanket statement. Just saying “real estate is expensive” is like saying “water costs a lot of money.”

There are so many details that go into pricing real estate. The cost of financing, the type of real estate, the zoning, the age of the building, and numerous other qualities can push the price of a property up or down.

However, there is one detail that is by far the most important: location. What country, city, neighborhood, and street is the property on? Location is the number one determining factor for the price of real estate.

And if you live in a city like San Francisco, Toronto, Hong Kong, or London, then I am sure you’ve noticed how much it costs to maintain your lifestyle. It ain’t cheap.

If we look at the Federal Reserve’s Economic Data, we can use consistent data points to determine if real estate really is expensive compared to other times in history.

Based upon the US National Home Price Index, real estate is currently more expensive than the peak of our last housing crisis.

And take a look at commercial real estate. 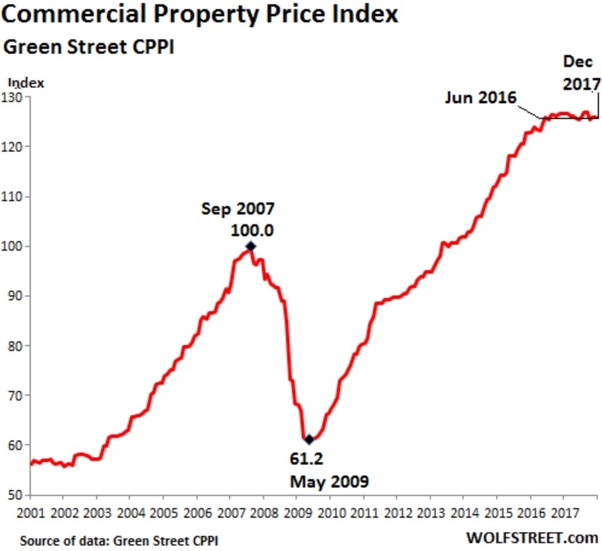 If we use the cyclical thinking for our economy, then I’m sure you can see exactly where real estate prices are headed.

Are we headed for an enormous real estate crash that will be larger than the 2008 US housing crisis?

Probably not. There were so many other components (fraudulent bank lending standards, adjustable rate mortgages, etc.) that lead to the ’08 crash.

However, that doesn’t mean that we won’t see a decline in real estate prices. Looking at the three clues I’ve listed above, it’s very difficult to make an argument that would suggest that real estate prices are going to significantly increase in the near future.

There are obviously many real estate opportunities in any market… you just have to know where to look.