Is the World about to enter a great economic crisis?

Warren Buffett & Charlie Munger Berkshire Hathaway are currently holding 38% of its total assets in cash. Buffett declared on this interview that cash is the worst performing asset as it gets corroded by inflation. So why is the most brilliant investor of all times holding such a high amount of cash?

Positive aspects of the global economy in 2018

For the first time since 2007, we’re seeing strong synchronized growth in the EU, US, China & Japan (the world’s biggest four economies) as well as other developed and emerging markets.

The global unemployment rate is at a very low level and when you isolate the biggest four economies (EU, US, China & Japan), we are at a 17-year lowest level. 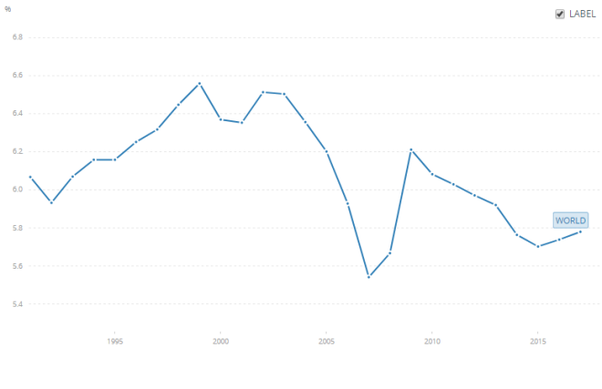 3. Stock markets, Cryptocurrencies, Startup capital are all soaring to all time record high again and again!

Here’s respectively the Japan and US stock indexes over the last 5 years: 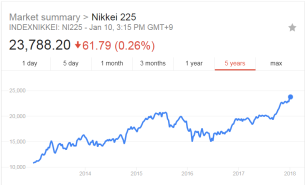 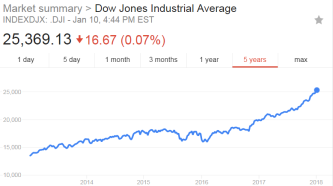 However, you can already see the contraction on the markets over the past few weeks and this post objective is to broaden our understanding on what’s behind this volatility.

The gradual construction of a global depression

a) Debt over GDP

I hate to say it but much of the good news described above was achieved not solely with real productivity, but with piles of central banks debts. 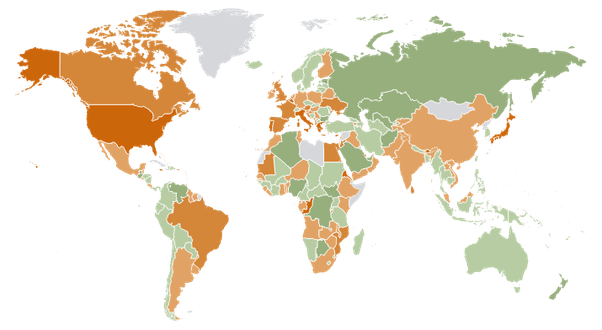 The combined balance sheets of the central banks of the U.S., Japan and the euro zone expanded by $8.3 trillion, while nominal GDP in those same economies expanded $2.1 trillion. That basically means that we’re borrowing $4 for each dollar we produce.

What happens when you print $8.3 trillion in money and only get $2.1 trillion of growth? What happened to the extra $6.2 trillion of printed money? It flew into assets. Stocks, bonds, emerging-market debt and real estate have all been pumped up by central bank money printing. 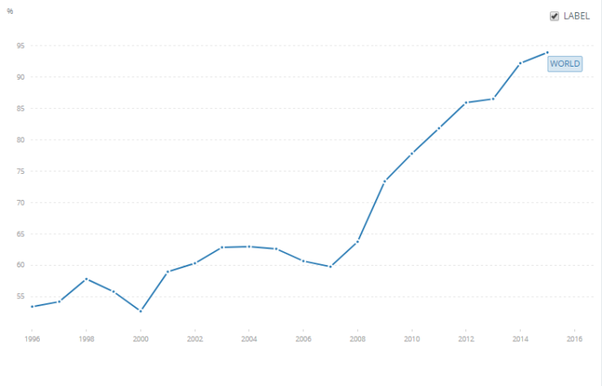 b) Student loans and Mortgages debts are also all time high

$1.3 trillion is the student loan debt in the US alone. $129 bn in the UK. These debts are becoming mature as we speak and this bubble is also about to be denominated as a bad debt meaning that we have the expectation that won’t be paid diligently.

This is also influencing the capital spending. We virtually had decreasing capital spending down four percent in the last quarter which is unheard of when you don’t have a recession.

A catastrophic wave of emerging-market defaults is visible to many experts in the market, with enormous spillover effects likely in developed economies. This is expected to be worse than the Latin American defaults of the 1980s and the Asian-Russia defaults of the late 1990s. Seems like Turkey and Venezuela are the first ones to declare defaults followed by many more countries.

Switzerland, Denmark, Sweden and Japan still holding their positions with nominal negative interest rates, “forcing” their savers to spend or invest their money, or otherwise losing it over time. Followed by the EU is the zero nominal rates which when discounted inflation means negative real interest rates.

The market is way overvalued at 20 times the S&P predominantly as a result of zero interest rates.” 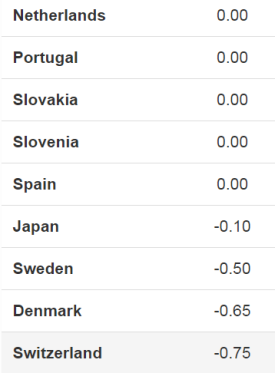 As the US raises its rates, being the supplier of dollar – the major world’s currency – all of the major central banks are expected to roll out their own rate hikes gradually.

Reducing money supply and raising interest rates might be the right policy if price inflation were out of control. But prices are actually falling.

The “inflation” is not in consumer prices; it’s in asset prices. The impact of money supply reduction and higher rates will be falling asset prices in stocks, bonds and real estate — the asset bubble in reverse.

U.S. Congress and White House got around to cutting taxes in late December. This is great news to stocks, not brilliant for the US population though. The balance of payments of the country which is already full of debt is now subsidising corporations to pay less taxes and boost their economic activity in the country rather than outsourcing to tax heavens.

More countries are expected to follow this move in order to compete with America.

Technology rules the day. The pace of innovation is unprecedented in world history. Our daily needs are being fulfilled better, faster and cheaper by the likes of Amazon, Google, Netflix and Apple. We can share the good news on Facebook.

This is primarily the reason why even though we operate on already well developed economies, we still experience growth. However, if you look at quarter reports from Google and Apple, you will see a glimpse of the sort of difficulties we have. These companies are holding exorbitant amounts of cash which could be interpreted as not having ideas or space to invest that cash into. Are the companies with such as concentrate flow of geniuses out of ideas? How come we can’t create breakthrough tech such as the Search Engine, Ipod, Iphone, Ipad? What’s the next field these companies should invest their human capital and money?

Productivity has not grown. In fact, it’s the lowest growing it’s ever been as far as growth goes.

What could spike the next crisis?

I. Conflict between US & North Korea

No secret to anyone that the most eminent conflict is between the above countries. It’s tough to predict the future, but North Korea is accelerating faster and faster its process to create a astonishing arsenal of nuclear weapons and the US will not tolerate that. It’s speculated that North Korea will reach an unstoppable tipping point by end of this year,. Threats have circulated multiple times from both sides and apart from Kim Jong-un being assassinated or replaced, there seems to be no other way than war.

The fear that Brexit won’t be a soft landing. That the UK will suffer abruptly and with it bring many countries down. Markets have shown their impatience with the leave process. The UK set to be out of the EU by March 2019 and the frequently asked questions are: Will taxes be imposed within EU-UK commerce? Will EU citizens working in the UK be granted working visas? Will the UK have to bear the many expenses of the leaving process?

The answers to the questions above are key to understand whether Brexit will be a hard or soft process.

Greenspan left rates too low for too long and got a monstrous bubble in residential real estate that led the financial world to the brink of total collapse in 2008.

Bernanke and Yellen also left rates too low for too long. They should have started rate and balance sheet normalization in 2010 at the early stages of the current expansion when the economy could have borne it (albeit without Dow 25,000). They didn’t.

Bernanke and Yellen did not get a residential real estate bubble. Instead, they got an “everything bubble.” In the fullness of time, this will be viewed as the greatest blunder in the history of central banking.

Not only that, but Greenspan left Bernanke some dry powder in 2007 because the Fed’s balance sheet was only $800 billion. The Fed had policy space to respond to the panic of 2008 with rate cuts and QE1.

Today the Fed’s balance sheet is $4 trillion. If a panic started tomorrow, the Fed’s capacity to cut rates is only 1.25% and its capacity to expand the balance sheet is nil, because the Fed would be pushing the outer limits of an invisible confidence boundary. Effectively, the US dollar would be pressured to stop being the world’s reserve currency in perpetuity. How much currency can a country print out and inherent debt accumulate before it loses confidence from its stakeholders?

4. The Rise of Populism

Trump, Brexit, European right wing parties arising. We have seen where this leads to over and over in history and it has never been in a bright place. Globalisation has enabled us to grow to the high levels we live today and populism means blockages to further globalisation.

As aforementioned the pressure is huge. And once one country starts defaulting the domino effect is rapid. Who will be the first to crack?

Why after reading all this you still need to get into the markets?

Simply because no one can time it. The next recession can come in 2018, 2019, 2020… and being out of the market would be an opportunity cost that you can’t afford. Why not? Because every single recession starts from an all time high, meaning that the greatest gains in the stock market come before a recession starts. Staying out of it results in depreciating your assets. So what can you do about all this? DIVERSIFY! Also buy bonds, gold, and others. More about diversification here: Investing as a Millenial