Property pricing bubbles and lack of access to land record is a major flaw in our real estate sector. These loopholes remain even after establishment of Punjab

What do you think about India’s 2018 budget?

The penultimate & the last full-fledged budget of Modi government was distinctive in multiple aspects, apart from being the first one post GST with lesser degrees of freedom. As anticipated, the Finance Minister pumped money liberally under schemes targeted at the rural poor, agriculture, infrastructure & social security, even when his Budget math slipped beyond his own targets.

Over the last few years, the Union budget has become as more of a media jamboree & most of crucial policy decisions are taken outside the Budget. The Govt typically plays to the galleries by making populist announcement during the budget but takes decisions on levying of tax, unleashing crucial reforms, hiking of tariffs, fares etc. outside of it through a quiet notification. This time also just a month prior to Budget, it unleashed new set of reforms, including 100% FDI in single-brand retail & the construction industry through automatic route, sending the right signals to global investors. Similarly, $33.2 billion bank recapitalisation announcement in Jan’18 goes to the heart of state-run lenders’ acute capital shortage & GST council’s decision to reduce rates on several items & services was in accord with the same approach. This budget was unique & crucial in several ways; hence the backdrop of the economic scenario needs to be looked into for a holistic assessment

The Indian economy is expected to expand at 7-7.5% in the next financial year with Agriculture, Education, Employment being areas of focus in the medium term, according to the Economic Survey 2017-18 prepared by CEA Arvind Subramanian. Setting the reform agenda for next year, the Survey elucidates that government needs to work towards stabilizing the GST, completing TBS (twin balance sheet) issues, privatizing Air India & staving off threats to macro-economic stability. The country is seen to be amongst the best performing economies, supported by higher growth,

lower inflation, improved current account balance & reduction in fiscal deficit ratio to GDP. GST has given a new perceptive of the Indian economy & new trends reveal that there has been a 50% increase in the number of indirect taxpayers. There has also been a large increase in voluntary registrations, especially by small enterprises that buy from large enterprises wanting to avail themselves of input tax credits. Similarly, there has been an addition of about 18 lakh in individual income tax filers since November 2016 (post demonetization), so ideally increased compliance should bring reduction in the tax slabs/rates.

Last year, Eco survey had warned that note ban will adversely impact cash-intensive sectors such as agriculture, real estate & jewellery, which was actually the case. CEA had outlined 3 risks to India’s growth in FY18 – note ban, pricey oil, global trade tensions, the first of which was a self-inflicted risk, last 2 still persists. As per CEA, demonetisation temporarily reduced demand & hampered production, especially in the informal sector, which transacts mainly in cash. This shock largely faded away by mid-2017, when the cash-GDP ratio stabilized.

One of the most crucial metric the headline inflation has been below 4% for almost a year, from November 2016 & CPI food inflation averaged around 1% during April -December in the current financial year, the Economic Survey 2018 said. The CPI inflation declined to 3.3% during FY 2017-18 (Apr-Dec), one positive outcome was that the economy has witnessed a gradual transition from a period of high & variable inflation to more stable prices in the last 4 years. CEA also admitted perhaps for the first time that the scope for monetary easing is now limited as inflation is surging in tandem with the recovery in economic growth.

While the survey was optimistic, it makes a case for policy vigilance to deal with downside risks stemming from rising crude oil prices & any setback to the ongoing recovery of the global economy.

As expected, the FM in his last budget played to the galleries keeping elections in mind without being callous towards the consolidation of fiscal path, in short he believed in “Modi” rather than “Moody’s”. PM Modi is well aware that he shall be assessed by his electorate based on development work done & the “growth” in the economy rather than on adherence to the fiscal deficit target. The decision to alter fiscal deficit target for FY18 revised to 3.5% of GDP; Fiscal Deficit target for FY19 at 3.3% Of GDP shall adversely impact the sovereign ratings of India (by firms such as Moody’s, S&P, Fitch),impact bond yields but at the same time revive demand & propel economy. While unveiling the Budget 2018-19, FM said that India has grown on an average of 7.5% in the first three years of the current government & has become a $2.5 trillion economy, adding that it is expected to become 5th largest economy soon.

The worrisome part is that the breach in fiscal deficit is despite a cut in capex which implies that had the government stuck to its targeted capital expenditure for FY18, fiscal deficit would have been still higher. The reason attributed to fiscal slippage by FM is shortfall in GST collections & major disruptions in the economy on taxation & regulatory front, which is plausible. We need to worry about the deficit number because a large deficit usually results in higher inflation.

PM hailed his government’s last pre-poll budget as a “big step” towards achieving Ease of Business and Ease of Living. Farmers, rural India & healthcare were the main focus of Budget 2018 but the middle class hopes for Income Tax relief were dashed. In a bid to woo the poor & vulnerable sections of the society ahead of the next general elections, FM announced a new flagship National Health Protection Scheme in Budget 2018 to provide health insurance cover of Rs 5 lakh per family per year to 100 million families, this “ModiCare” seems inspired by a similar scheme initiated by erstwhile US President Barack Obama in form of “ObamaCare”. In a country with acute shortage of doctors & lack of quality medical facilities in rural areas, this scheme looks good on paper but could be a nightmare to implement. This can be absolutely game changing if only we get more specifics about it. 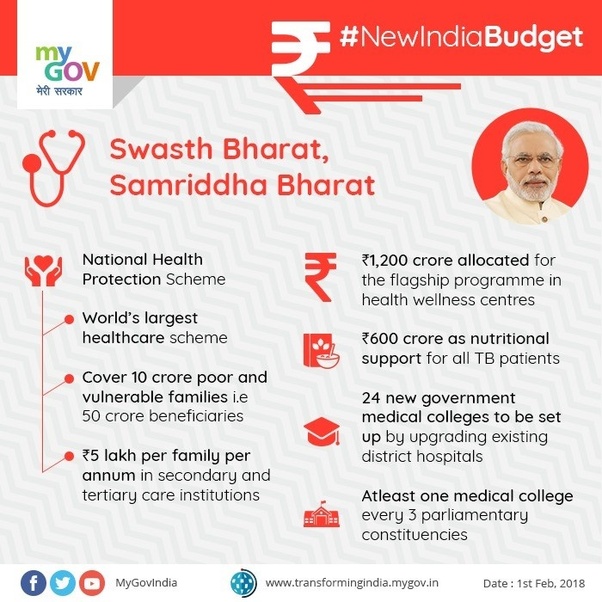 The biggest bonanza announced for farmers was to provide Minimum Support Price worth 1.5 times of the cost of production for Kharif crops. Further, the government doubled the allocation of funds to boost Food Processing, specialized agro-processing & financial institutions promoted by the government. The government was expected to pay much needed attention to address the rural distress as it has been a key focus area for the NDA government as it constitutes the largest chunk of constituencies for upcoming assembly elections in 8 states.

The Govt set a target of raising Rs 80,000 crore in 2018-19 by selling stake in state-owned assets after surprisingly exceeding its record divestment target in 2017-18. Small Businessmen were adversely impacted by GST roll out & demonetisation. In Budget 2018,FM assuaged their pain by reducing rate of corporate tax to 25%, currently available for companies with turnover of less than 50 crore (in FY16), to companies reporting turnover up to Rs 250 crore in FY17. FM proposed changes in customs duty to promote creation of more jobs in the country & also to incentivise domestic value addition & Make in India in sectors such as food processing, electronics, auto components, footwear & furniture. A big dampener for the stock market was a reintroduction of the Long Term Capital Gains tax on gains of more than Rs 1 lakh in the equity market at a rate of 10%.

As for Digital India, this budget focussed on developing the villages of the country. FM announced to provide internet access to rural areas through 5 lakh WiFi hotspots that will be set up in rural areas to provide easy Internet access. On the latest fad, FM stated that cryptocurrency is not legal tender in India but the government will explore its underlying technology, called blockchain, to usher in the digital economy. Policy think tank Niti Ayog will take the lead in implementing policy initiatives ranging from farm sector reforms to establishing a new ecosystem for artificial intelligence. 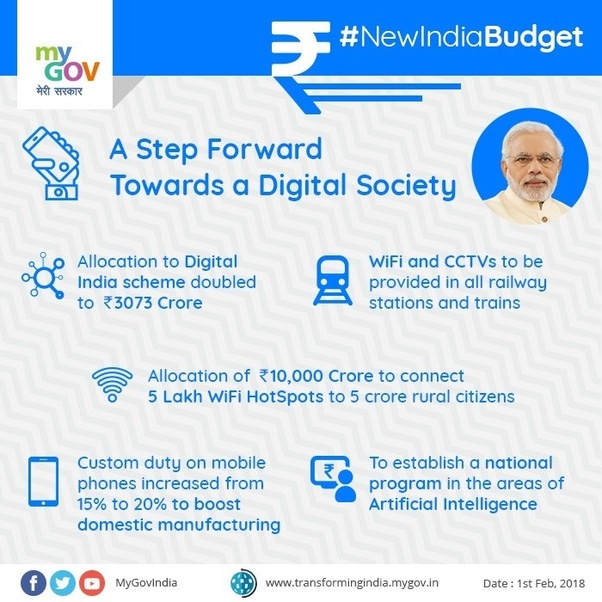 The Finance Minister took good care of the senior citizens & pensioners, allowing complete waiver of tax deducted at source on interest earning of up to Rs 50,000 on bank fixed deposits & post office savings, while extending tax rebate on annual health insurance premium of up to Rs 50K & enlarging the scope of tax exemption on critical healthcare to Rs 1 lakh for senior citizens.

For the core of the economy, FM budgeted Rs 5.97 lakh crore infrastructure spend for FY19, which went up by over Rs 1 lakh crore from this year’s level. Out of this Railway Ministry led by Piyush Goyal got significant contribution , some Rs 1.48 lakh crore will go towards renewal of 3,600 km rail track, redevelopment of 600 railway stations. Rs 40,000 crore will be spend on developing some 150 km suburban railway tracks. 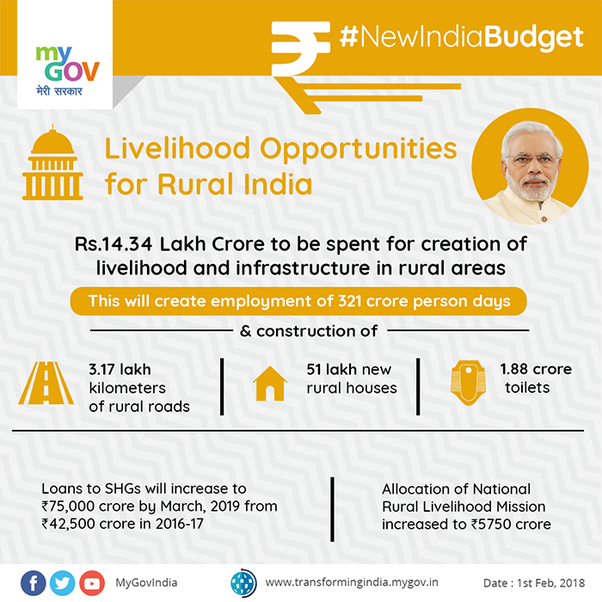 India’s defence budget was hiked by a measly 7.81% from Rs 2.74 lakh crore last year, once again dashing the hopes for any major jump in military modernization this year despite heightened tensions with both Pakistan & China along the volatile borders. On the education front, the Budget offered huge sops to the sector, including Rs1 lakh crore allocation, which will be deployed over the next 4 years under the Revitalising Infrastructure and Systems in Education (RISE) programme

The Budget proved to be a disappointment for the real estate sector, the only good news is in the affordable housing segment as the Centre announced a special fund for the same through the National Housing Bank. There are no changes in Income Tax sops or other direct measures that influence the sector, also the demand-supply dynamics of real estate sector get no further intervention.

The sore point of the Budget will be that salaries of MPs being double while the middle class end up paying more taxes. It provided little relief to salaried class as benefits under the proposed Rs 40,000 standard deduction will be neutralised to a large extent by inclusion of transport & medical allowances and 1% hike in health/education cess.

To summarize, FM has tried to sell dreams without detailing how the government will achieve them, but he has been prudent without being too populist. Overall, this was a typical pre-election budget & the Govt went all out with grandiose announcements for its target electorate- the farmers, traders & economically backward sections of the society, as they seemed determined to bring “Acche Din” for them at least.

Details of the Budget can be found on the following link: