It’s no secret that for the past two years, from Glenwood to Aspen, the real estate market has not only recovered but is the busiest we’ve seen since before the

Why must there be corporate greed?

Have you ever worked for a company that mangled a great idea into something unrecognizable?

I was visited by a new VP while selling for GE fifteen years ago. My territory grew double digits the prior year and he was interested to know how I did it.

I didn’t have any magic bullets to offer — Hard work, prospecting, calling on new markets and working with my local field engineers for new leads.

The last part got his attention.

“Tell me more about how your field engineers help you sell.”

A Business With Great Teamwork in Place

We had 100 sales reps and 800 field engineers spread across the United States.

Often, customers were agnostic about the product but purchased from GE based on the talents of a particular field engineer.

In most offices, we had incredible relationships. Our goals were aligned, and we each played a specific role in the business.

We both had a vested interest in securing as much business as possible.

For the sales rep, hitting sales quota meant more money and potential for a bonus. On the other hand, missing sales quota enough meant losing your job.

I raved to this VP about my “guys.” I had 9 in our local office, and I loved that crew. When I first started, I spent as much time as I could with them.

Most worked in the industry for 20–30 years. They knew the potential customers and could tell me how these companies made decisions.

I would be a fool not to tap this wealth of knowledge for help and they would be silly not to help the new kid, given that they relied on me to bring in business and keep them busy.

A Process That Didn’t Need Fixing

I started every week checking in with all of my field engineers. How were their jobs going? Did they need my help with anything? Did they hear about any new projects coming up? Any opportunities to sell an upgrade versus fixing equipment past its useful life?

The best opportunities came from emergency calls. Several engineers were always on-call. If GE equipment failed, they made the service call to get a customer back up and running.

What better time for me to visit a customer than immediately following a stressful event? Most of this equipment was in bad condition as companies tried to push off capital projects to save money.

The engineers would often email or text me right from a job site.

“I’m at the Ford plant in Chicago Heights working on switchgear. It’s in horrible shape. I told the maintenance manager you would call him. His number is XXX-XXXX.”

I get a lead to follow up on, and the engineer has a potential job that could keep him busy for an entire month. We made a great team when we communicated like this.

It’s Not a Process Until Someone Takes Credit

After explaining our local process, I can see the wheels spinning with this VP.

“How can we leverage all of our field engineers in the same way?”

“Well, I think most sales reps are doing the same thing I do. We might want to come up with a way to say thanks to the field engineers that are good at this.”

He visited several other sales reps who gave him similar feedback, expanding on the partnership that was working.

Within a month, an email came out to the entire organization. Our business was rolling out a new recognition process where field engineers received credit for leads they offered to the sales team.

At first, this was a marginal win.

At our annual meeting, several of these field engineers received awards in front of the company for being selfless teammates. It was nice to see them get their due.

This story would be beautiful if it ended there, but in business, no good deed goes unpunished.

Shortly after that meeting, the process had a corporate name. Local teamwork was now officially “Field Engineer Lead Generator.”

What came next was not received well.

The Carrot Becomes the Stick

Every field engineer received a monthly “quota” of leads to reach. The dashboard that started as a means to give kudos became a scoreboard.

Field engineers now had to jump on weekly calls to talk about their leads, just like the sales team. Those lower on the list were harangued as not being team players, even though some of these field engineers at the bottom were among our best for billable hours.

Helping was no longer altruistic, it was a forced burden. 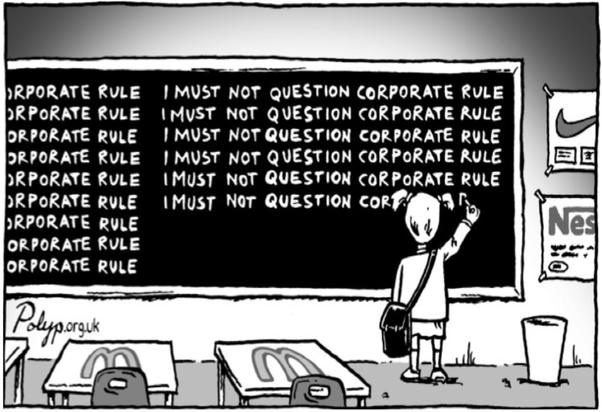 Some field engineers disdained the process so much that relationships with the sales team were soured.

Soon, the brain trust in corporate started looking at some of the offices with a skeptical eye at the sales team. With so much pressure to help the field engineers avoid scrutiny, we were giving “lead” credit on just about every new sale.

I had to start getting on yet another call to explain why I wasn’t prospecting.

“Well, it looks like 100% of your business is coming in from field engineer leads. If this is accurate, why do we need a sales rep in that territory?”

It was a classic example of corporate greed destroying a good thing.

This is a step-by-step process detailing why there must be corporate greed:

Two years later, a new VP abolished the process, hoping to make his mark with a new initiative.

Greed often starts with good intentions and twists into something unrecognizable over time.

For executive and managers, if you find a great idea from the front line, keep talking with those people during implementation.

Just like the third plate at a buffet impacts your waistline, too much of a good thing can have similar consequences in business.