This company offered guided bus trips to the real-world filming locations of the . the sword of ‘Game of Thrones’ character Jon Snow, at the Castle Ward Estate.

What are the Historical Events that inspired “Game of Thrones”?

Author of the Game of Thrones series, George R.R. Martin, once claimed that “No matter how much I make up, there’s stuff in history that’s just as bad, or worse” which is a bit of a scary thought. The series has been greatly influenced by moments in history, and here are a few of the most notable similarities between the world of Westeros and the real world: 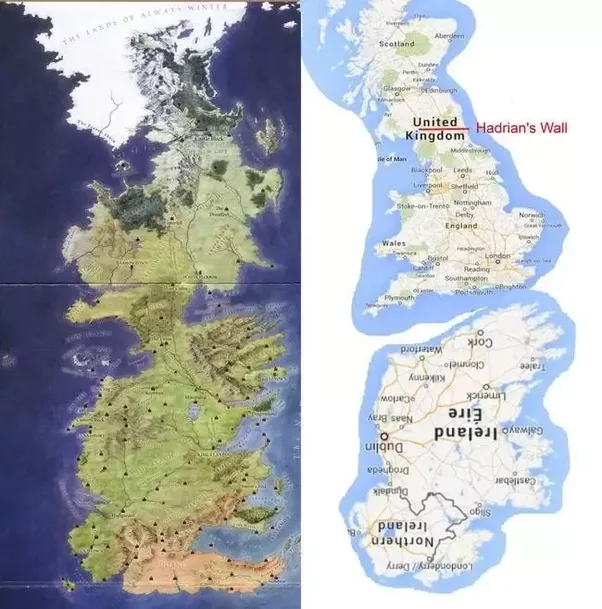 The map of Westeros very closely resembles England, with an upside down Ireland beneath it.

2. The Wall and Hadrian’s Wall 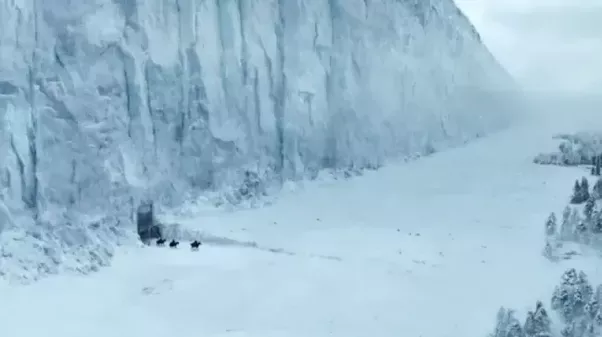 Likewise, The Wall in Game of Thrones that divides the White Walkers from the humans is situated in more or less the exact same place on the Westeros map that the Hadrian’s Wall is on the UK map. Hadrian’s Wall divided the Romans from Scottish Barbarians. George RR Martin visited the site before penning A Game of Thrones, and recalls: “I tried to imagine what it would be like to be a Roman soldier… to gaze off into the distance, not knowing what might emerge from the forest.”

3. The Starks & Lannisters and the Yorks & Lancasters 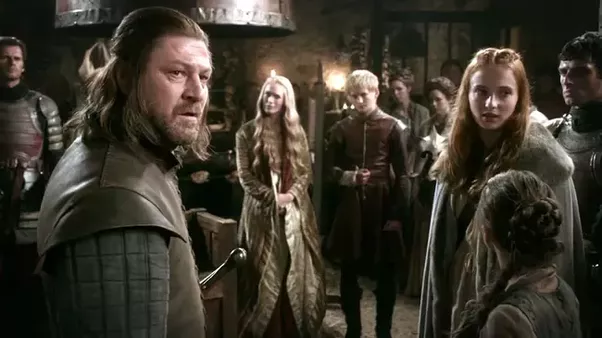 So much of Game of Thrones has been inspired by the Wars of the Roses, a series of wars in the 15th Century over the Throne of England after the Hundred Years’ War. Battling in these wars were the House of York and the House of Lancaster. The Yorks are northerners much like the Starks, while the Lancasters are obscenely wealthy just like the Lannisters. Obviously, the most glaring similarity is in their names. 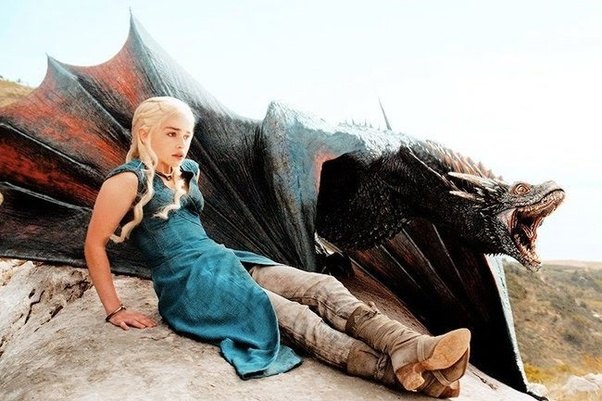 Henry Tudor was an exiled nobleman who spent most of his life across a “narrow sea” in France. Here, he would strengthen his power and plan his invasion of Britain, though nobody around him believed it would happen. This is all probably very familiar to you, as its pretty much the story of Daenerys.

Tudor fought for the Lancasters, and eventually ended up on the British throne at the conclusion of the War of the Roses… we’re not yet sure if that’s a spoiler or not… 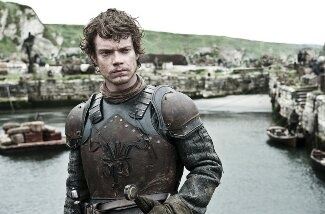 George Plantagenet entered the Wars of the Roses on the side of House York, alongside his brother Edward IV, however eventually changed suit and began batting for the House Lancaster. Down the line he attempted to jump back with the Yorks, and was found guilty of treason. This is all very much similar to the story of Theon Greyjoy, while Robb Stark’s story seems to resonate with Edward IV.

6. Joffrey Baratheon and Edward of Westminster 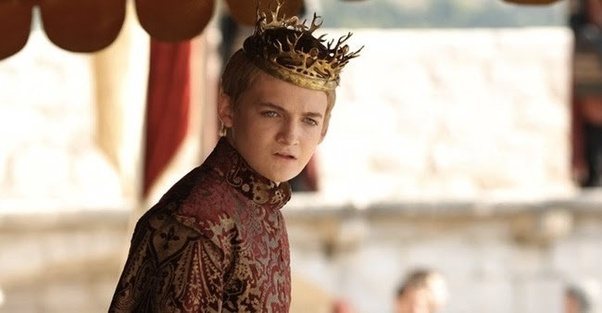 It’s hard to believe that some of these sadistic, sick souls can actually be modeled after real people, especially Joffrey Baratheon. Edward of Westminster was the psychopath who inspired Joffrey. A Milanese Ambassador once said of Edward, the son of King Henry VI, “This boy, though only thirteen years of age, already talks of nothing but of cutting off heads or making war…” Sound familiar?

Edward was captured at the Battle of Tewkesbury when he was 17, slapped in the face with Edward IV’s metal gauntlet, and eventually cut down by the swords of his enemies. 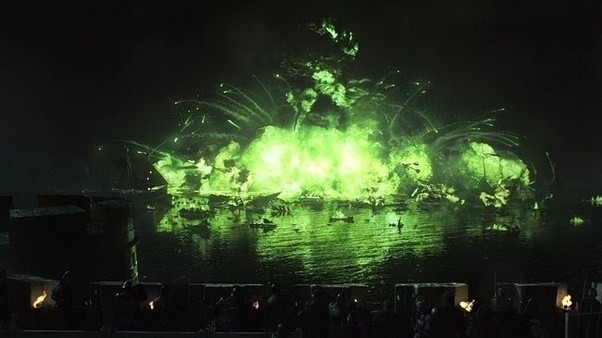 If you disregard the magic, and the fact that the fire was green, the fire used by Tyrian to take out Stannis Baratheon’s navy during the Battle of Blackwater is pretty much exactly the same as the Greek Fire. The Greek fire also has the ability to continue burning on the surface of water, and was used by the people of Constantinople against invading Arab armies during the siege of the Byzantine capital.

8. White Walkers (the Others) and Celtic Fairies 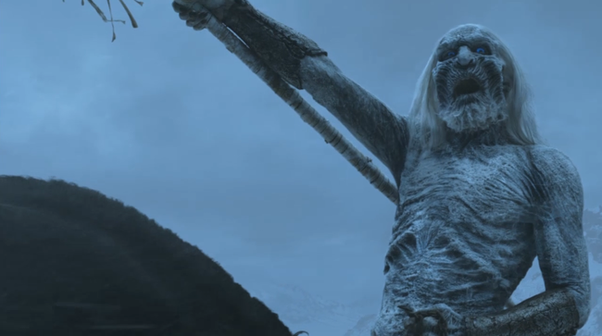 The terrifyingly brutal White Walkers are largley based on the Aos Sí, or the Sidhe, a race of fairy-like beings from the Irish Mythological Invasion Cycle. The invasion of the Others seems to follow the same cycle as that of the Celtic fairies, too.

9. R’hllor, The Lord of Light and Ahura Mazda, The God of Zoroastrianism 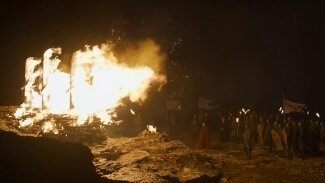 Zoroastrianism is perhaps the oldest monotheistic religion in the world, and George RR Martin admits that the worship of Ahura Mazda had a very strong influence on the development of R’hllor. Worshippers of both deities hold fire as sacred, and pray in its presence. They use fire as a means of gaining wisdom and spiritual insight. 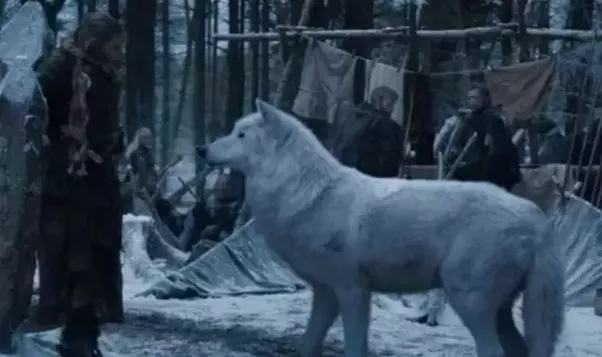 Dire wolves are an extinct cousin of wolves that are quite obviously the inspiration for Ghost, Greywind and Nymeria and the other direwolves of Westeros.

Much like Littlefinger, Oliver Cromwell was a minor nobleman. There are many similarities between the palace treasurer (Petyr) and the military leader (Oliver). As Littlefinger continues to climb the hierarchal ladder we have to wonder whether he will follow in the footsteps of his real-life inspiration, who eventually found a way to become Lord Protector of the Commonwealth.

12. The Red Wedding and The Black Dinner & the Glencoe Massacre

To be honest, it’s a little bit of a relief to know George Martin didn’t materialize the brutality of the Red Wedding entirely on his own. Martin took influence from two different events; the Black Dinner and the Glencoe Massacre. In the Black Dinner, the king of Scotland welcomed his enemy the Earl of Douglas into his home for a meal with guaranteed safety. The guaranteed safety, of course, was a complete lie. After dining, a drummer began pounding on a single drum as the Earl was served the head of a black boar on a plate – the symbol of death. He was put to death in the courtyard.

Clan Campbell invited their detractors in Clan MacDonald to stay overnight with them. That night, every MacDonald man was unsurprisingly and ruthlessly slaughtered in their beds by the Campbells, in what became known as the Glencoe Massacre.