Hudson Yards, the $25 billion private real estate project on the Far West Side of mid-Manhattan, was officially opened on March 15. It has been hailed by its

What are some interesting construction projects that are planned for New York City? 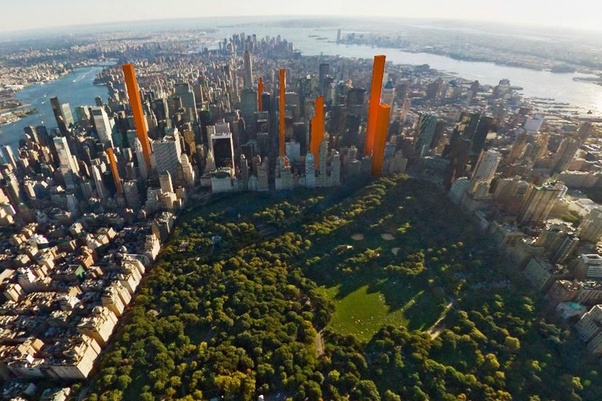 AM New York: Skyscrapers that will forever change the skyline

There’s no question about it, New York City’s iconic skyline has been undergoing a transformation over the last few years. With supertall buildings—both residential and commercial—sprouting up like cement weeds all over the city, street artists will soon have to do away with hawking their classic versions of the cityscape. Some of the planned structures set to open in the next three years will even snatch tallest building titles out of the hands of other recently completed buildings.

With the skyscraper wars in full swing, we took a look at some of the buildings that will change the city’s skyline.

Only a building this tall could have three different names. At a planned 1,550 feet, 217 W. 57th St. will be the second tallest skyscraper in New York City and the tallest residential building in the Western Hemisphere when it’s completed in 2019. The building, which is also officially known as the Central Park Tower, will be a mix of luxury residential condos and commercial space. Extell Development Co. plans to begin selling the condo units later this year, according to Curbed NY. Unofficially, the building is also referred to as the Nordstrom Tower, since the company’s new seven-story flagship store will be housed there.

When it’s complete, One Vanderbilt will tower over Grand Central Terminal at 1,401 feet. Planners fully expect that the first new skyscraper in midtown east in years tower will invigorate the real estate market in the area. The building has been planned with angled cuts and tapering volumes that spiral upward; its base will include a transit hall to Grand Central Terminal as well as the East Side Access project when it’s finished. The tower’s developers also announced it will boast a 1,020-foot skydeck that will be open to the public via an entrance in Grand Central. A groundbreaking ceremony was held in October 2016. The building is scheduled to open in 2020.

The “world’s skinniest skyscraper” at 111 W. 57th St. is to rise to 1,428 feet (that’s 30 feet taller than its neighbor, 432 Park Ave.), but will only be 60 feet wide. As a result, the 80-story building will be home to just 60 apartments when it’s completed in early 2018. Though sales have not yet begun, apartments will reportedly start at $14 million apiece and could be as expensive as $100 million, according to Curbed.

When 432 Park Ave. topped out at 1,396 feet in October 2014, it became the second tallest building in New York City — and the tallest residential building in the Western Hemisphere. But those titles won’t last long with 111 W. 57th St. and 217 W. 57th St. slated to open in the coming years.

Construction for this World Trade Center site is currently on hold due to lack of an anchor tenant. Once construction is completed, however, the 1,340-foot-tall building will feature green terraces on several observation decks that get smaller as the building gets taller, giving the structure the appearance of stairs or steps from a distance. The commercial tower is being marketed by Silverstein Properties as a work environment featuring a mix of open workplaces, informal meeting spaces and amenities such as a running track and basketball courts.

The site of the former Hudson Rail Yards is in the midst of a major transformation from disused and desolate lot to what is expected to be a vibrant commercial and residential hub. One of the centerpieces of the massive project is 30 Hudson Yards, a 90-story office building set to be completed in 2019 with Time Warner Inc. as its anchor tenant. The planned 1,296-foot-tall building will feature the highest outdoor observation deck in the city and a direct underground connection to the new Hudson Yards subway station.

Though construction has hit a few snags since it began in January 2008, all 80 stories of 3 World Trade Center are slated to be complete by 2018. According to Silverstein Properties, the 1,079-foot-tall commercial tower, which will connect to 11 subway lines and the PATH, will also offer street-level and underground retail options.

The 1,050-foot tall residential building at 53 W. 53rd St. will complete the ultra luxurious “Billionaire’s Row” in midtown. Designed by Jean Nouvel, the 82-story building is currently under construction. There will be 140 condos in the building, with listing prices between $3 million and more than $50 million.

The Spiral at Hudson Yards

When the Spiral at Hudson Yards is completed, it will stand at 1,005 feet. Although construction has not yet begun, plans for the tower include a series of cascading terraces surrounding the 65-story building that will offer a plethora of outdoor space. The Spiral, billed as commercial and office space, will span an entire city block on Hudson Boulevard between 34th and 35th streets, right at the center of the Hudson Yards project.

Currently under construction, the 950-foot high 220 Central Park South will be filled with luxury condos. Although sales have not opened to the public yet, Vornado has already sold $1 billion’s worth of condos (about a third of the building), according to Crain’s New York.

30 Park Place is currently the 10th tallest building in New York City and, according to its website, the tallest residential tower in downtown Manhattan. The site of a Four Seasons Hotel and 157 luxury residential units, the building stands at 937 feet and boasts sweeping views of the city.