Although the Orange County real-estate market experienced a slight cooling in 2018 compared to the red-hot environment of 2015 through 2017, local experts

What is going on with Orlando real estate market?

Real estate market analysis is highly dependent on an array of fundamentals including, but not limited to the economy, demographics, infrastructure, education, specific location, timing, the property specifics, etc.

While there is no way to accurately forecast all elements that can cause a real estate investment to go up or down in value, understanding and analysing the current basic market conditions will allow us to make an informed decision.

That having been said,

I find the current Orlando MSA real estate market an interesting one in terms of investment, for the below reasons.

You may find below what I think are some of the indicators that Orlando is a strong market on the rise and will continue to be so, taken from an Orlando Market Report I prepared recently.

– Florida is one of the only seven states that have no State Income Tax; this plays an important role in locating a business, as well as the volume of migration into the state; this helps Orlando attract and retain talent and business

– Strong job growth with the highest rate of increase in payroll employment among MSAs: Orlando 4.48%, while it is followed by Seattle at 3.49% (between Nov 2015 and Nov 2016)
(% Change in Payroll Employment, MSAs > 1M Jobs, prepared by the Council for Community and Economic Research) 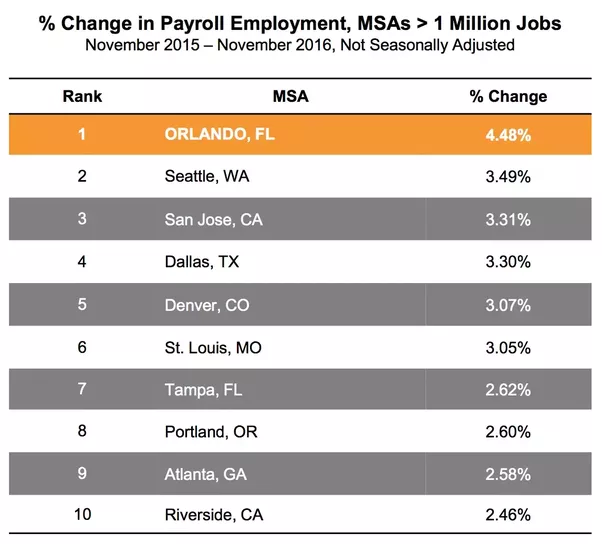 – The roadway infrastructure going in:
— expending I-4 ($2.3B I-4 Ultimate set to be complete in 2021, connecting Orlanto to I-75, I-95, also including many bicycle-pedestrian bridges and tunnels.)
— the beltway going around Orlando (construction starts 2019 on a new interchange between SR429, SR417, and I-4; completing the beltway around Orlando.)

– The railway infrastructure going in:
— Orlando’s first commuter rail transit system, SunRail opened in 2015 (615M USD investment), stretching 31 miles from Debary to the Orlando Airport (MCO), and to the north of Orlando
— the rail groing from Cocoa to Port Canaveral
(All Aboard Florida plans on building a train station near Clearlake Road in north Cocoa, offering passengers quick access to Port Canaveral, the beach, State Road 528 and U.S. 1.)
— potential rail coming from Miami
(Potential project in which, Brightline trains will connect Miami, Fort Lauderdale, West Palm Beach and Orlando along a 235-mile route. The stretch from Miami to Orlando will last three hours, comparable to what it takes to get to the airport, go through security and fly. 2.2B USD investment)
— lightrail
(OIA to FL Mall to Orange County Convention Center; that having been said, this project may be dead)

– The airport infrastructure going in:
— expanding the Orlando International Airport (MCO) (Delayed from 2019 to 2020; OIA $1.8B south airport terminal near the current airport; adjacent to the $1.3B train station being built two miles south of OIA)

– University of Central Florida (UCF), a public state university located in Orlando, is the second largest university in the U.S. with over 63,000 students (as of Spring 2016)

– An array of golf courses, both public and semi-private

– One of the largest convention cities in the U.S.

– While the average U.S. housing market experienced a 23% dip following the 2007 downturn, Orlando experienced a 56% within the same period, and the recovery for Orlando has been slower than that of the U.S. on average;

Again, real estate is a very local game and the success of the investment depends on an array of factors. The job grotwth, the median age of population, the amount of infrastructure investments being made, the dynamic tourism sector, the affordable life style, and the rates at which the market climbed back up relative to that of the rest of the U.S., and many others are all indicators that Orlando is a strong market, and will continue to be so in the upcoming years