Over the last two decades, real estate has transformed from the primarily experience-and-intuition kind of business into one that is extremely data-driven.

Why did Apple remove the headphone jack from the iPhone 7?

In short, because it was more trouble than it’s worth.

A waterproof iPhone is a big win for users. Apple collects all sorts of data through AppleCare and the Genius Bar about what kinds of problems people have with their Apple devices, and they use this data to improve future products. Perhaps the best known example is the MagSafe adapter: Apple saw many broken laptops which had been pulled to the ground when someone tripped over the charging cable, so they designed a charging cable with a magnetic connector which would harmlessly detach when you sharply tugged on it. But they’ve also used this data in other ways, like selecting more resilient materials for iPhones; their moves from plastic to glass to various grades and colors of aluminum was driven by seeing what condition iPhones were in when they returned to the Genius Bar after months or years in the wild.

The most common kind of accidental damage for iPhones is probably dropping a phone and shattering the screen. Apple has changed the screen glass a couple times, and made an abortive attempt at moving to sapphire, but it hasn’t quite fixed that problem yet. But the second most common type is most likely liquid damage. I’m sure you know somebody who’s drowned an iPhone (and probably tried to revive it with a bowl of dry rice)—everybody does.

That’s what the limited waterproofing in the iPhone 7 is really about. It’s not about taking your iPhone for a swim, or in the shower, or even out in the rain. It’s about accidentally dropping it in the toilet or pool, or forgetting it’s in your pants pocket when you do the laundry, or getting splashed when a car drives through a puddle, or any of a hundred other accidents which used to result in an expensive repair that made you less happy with your phone.

So waterproofing (yes, I know, it’s actually water resistance) is something every iPhone user needs, even if they don’t know it. It’s an important feature.

Unfortunately, it’s also a difficult feature. Every part of the phone that interacts with the outside of the phone needs to be redesigned, usually in ways which make them larger. And that’s a problem.

The inside of an iPhone is valuable real estate. There’s a story from the iPod days: examining a prototype one day, Steve Jobs said it was too big, but the engineers told him that making it smaller was impossible. So Jobs dropped the prototype in an aquarium and watched closely as it sank to the bottom, trailing bubbles. “Those are air bubbles,” Jobs said. “That means there’s space in there. Make it smaller.”

Apple’s engineers have long since learned that lesson. Today, iPhones are crammed full of components, with as little wasted as possible. Most of the space inside an iPhone is behind the display assembly. In this area, the thickness of components is limited; you can put chips and batteries here, but not much else. Access to the outside world is also obstructed—the screen is in front of you and solid aluminum behind.

That means that any component which is nearly as thick as the phone, sends or receives radio signals through the antenna lines, or reaches the front of the case has to be in the bezel areas above or below the screen. That includes antennas, cameras, ports, speakers, sensors, microphones, and the Home button and Touch ID hardware. I’ve labeled an image (from the old marketing website) of the 6S internals to give you an idea of how much stuff is jockeying for space in these couple square inches: 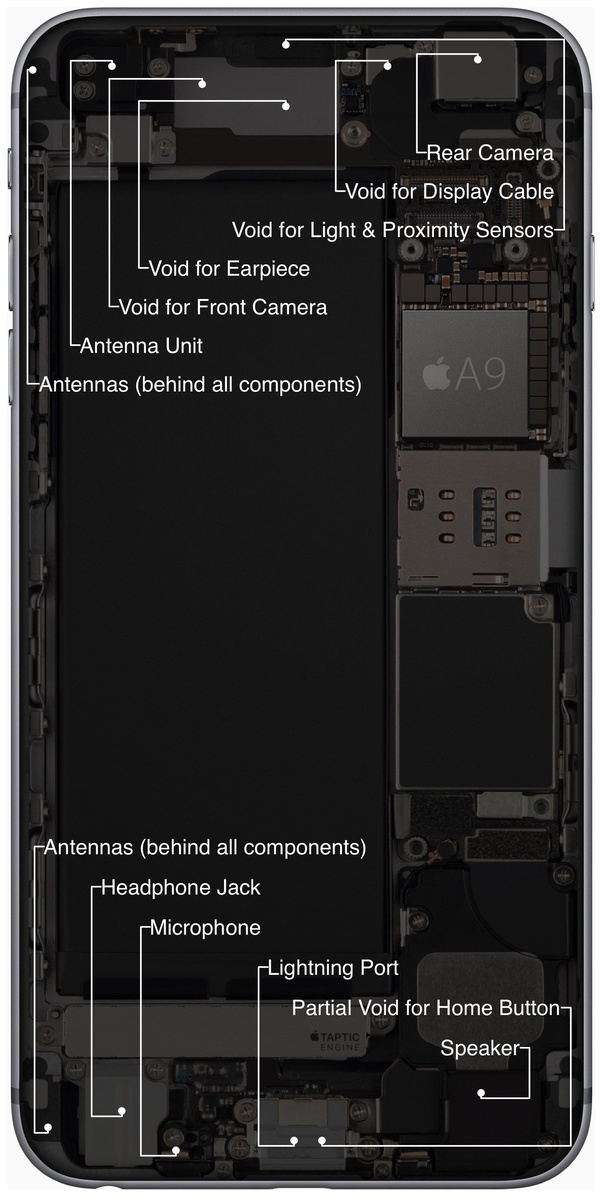 Just eyeballing it, the headphone jack in the 6S probably takes up about 10% of the bezel space in the entire phone. (I’m talking about the entire jack assembly—the big whiteish piece in the bottom left—not just the shaft itself.) The only larger bezel components are the speaker, the rear camera, and possibly the earpiece.

Think of real-world places with very valuable real estate. In Manhattan, a not-so-profitable gas station occupying a parcel of very expensive land will often be bulldozed to make way for a tall building full of lucrative offices or condos. The inside of an iPhone is valuable real estate, and these bezel areas are especially scarce. Parts that aren’t providing enough value are likely to get bulldozed.

Waterproofing takes a lot of space—especially when it demands a new Taptic Engine. Here’s a similar image of the bottom bezel area of the iPhone 7. You might notice that most of the components are completely different: 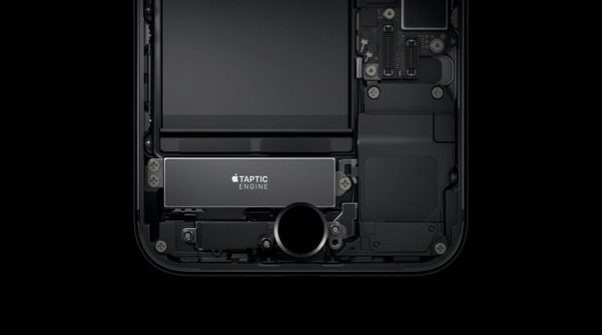 But the new Taptic Engine protrudes into the space previously taken up by the headphone jack; I estimate it covers about a quarter of the jack’s depth, depending on the purpose of the three prongs just below the Taptic Engine’s main body. And it has to be there, in the bottom left of the phone; it must be near the Home button, and the speaker’s on the right side.

Looking at the rest of the bezel, the speaker is also much larger and fully enclosed. Presumably this makes it louder and improves its waterproofing. There are also water-tight seals all around the rim of the phone. And there are a number of other new components here; in the exact location of the old headphone jack, you’ll find a barometric vent, which allows the barometer to work so the iPhone can sense altitude changes (like climbing a flight of stairs) without permitting water into the phone.

I don’t know of a similar image of the top bezel, but with a larger rear camera, a second speaker, and the need for similar waterproofing work in that area, I can only assume it’s gotten pretty crowded up there, too. Perhaps the unidentifiable parts in the 7’s bottom include a replacement for the antenna unit at the top of the 6S.

So if the headphone jack couldn’t stay in the lower left, then where else could they have put it? It’s a huge component, it’s only getting bigger if it’s being waterproofed, and it absolutely must be in one of the cramped bezels.

Keep in mind as well that, even with the headphone jack gone, there’s tons of other stuff that still won’t fit in the bezels. The 9.7″ iPad Pro has a really cool “True Tone” display which changes its color temperature to match the lighting conditions. It’s gotten rave reviews, and I thought it was a shoe-in for the iPhone 7. But it didn’t make the cut—it requires two extra light sensors in the bezels, and there just wasn’t room for them.

Ports are especially difficult to waterproof. Besides being literally holes in the phone, ports are also places where electricity is directly exposed to the outside world. It’s well known that electricity and water don’t mix—or rather, that they mix all too well. That means ports need special attention when you’re waterproofing.

The iPhone 6S has two ports: the Lightning port and the headphone jack. Lightning was introduced only a few years ago; given how serious an issue water damage has been and how long Apple’s product cycles are, I suspect they were thinking about waterproofing from the beginning, so this would have been pretty easy to handle.

That’s not to say it’s impossible to waterproof a headphone jack, or that other manufacturers haven’t done it. But the most dependably waterproof port is the one you removed.

It doesn’t actually do very much. So the headphone jack takes up lots of precious bezel space, is especially difficult to waterproof, and is in the way of the necessary expansion of the Taptic Engine. It’s causing a lot of problems. How much is it bringing to the table? Is it pulling its weight?

All of these are not only redundant, but doubly redundant: the Lightning port and Bluetooth radio can both do all of these things.

The headphone jack can’t really do anything else. You can’t connect other accessories to it. (Well, you can do some simple, passive things like a Square card reader, but this is hacky, insecure, provides a poor user experience, and can be done better through Lightning or Bluetooth.) You can’t provide power through it, so active noise cancellation headphones need separate batteries. You can’t perform media commands beyond the basics provided by the Apple inline remote, or figure out what the phone is playing, or even learn the current volume level.

The headphone jack is a gas station in Manhattan. There are more valuable things that could be done with the space.

It does half of what it does in incompatible ways. There are actually two standards for stereo-plus-headphones: 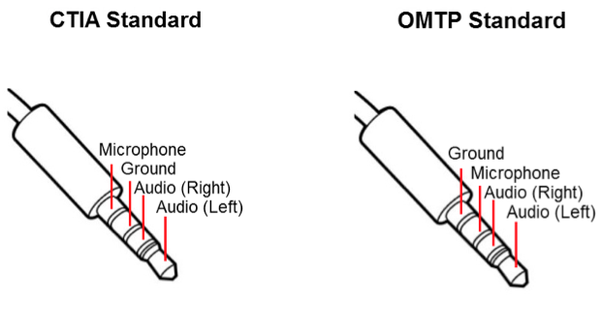 The iPhone uses CTIA (except in China, where OMTP is legally required), but some manufacturers use OMTP, and others used to use OMTP but have switched to CTIA. If you plug in incompatible devices, the plug will mechanically fit, but the headset won’t work properly.

Even leaving this issue aside, the play/pause and volume buttons are the Wild West. The only standard in this area, Android’s Wired Audio Headset Specification, appears to have been introduced in 2015, years after every phone manufacturer was already shipping headphones with controls on the cable. By that time, Apple had already shipped hundreds of millions of remotes that could never be made compatible with it.

This whole area is an intractable mess.

Headphone cables suck. Have you ever noticed that the feel of the plastic in an Apple headphone cable has changed over time? That’s Apple trying to reduce the cable’s tendency to knot in your pocket. Unfortunately, the cable is long enough that it’s mathematically impossible to keep it from tangling, but they can try to make it a little bit better.

Headphone cables also snag (Apple responded to this by making iPods and iPhones pause when the headphone cable is yanked out of them). They end up on the wrong side of clothes and straps. They turn out to be too short or too long. They fray and break. In general, they’re just an overall nuisance.

Lightning cables are the same way, but wireless Bluetooth headphones avoid all of these problems entirely.

W1 has a neat trick up its sleeve. AirPods and other devices with the W1 chip can automatically switch between your different devices, so if you’re listening to music on your computer and then answer a call on your phone, they can seamlessly switch over without you having to unplug and re-plug a cable. That’s really convenient (and it encourages people to buy all-Apple, too).

Perfect backwards compatibility is possible. A headphone-to-Lightning adapter is cheap enough to ship with every iPhone and compatible with all devices supported by the old built-in port. Adapters aren’t ideal, but they’re a good solution for getting us over the hump.

In the long run—once the price drops—Apple believes that Bluetooth is the future for casual headphone use, while Lightning will serve advanced use cases like professional audio equipment. The only real cost, they believe, is the pain of the transition. If we ever want to leave the headphone port behind, that pain will have to be borne eventually. And they believe that now is as good a time as any to get it over with.